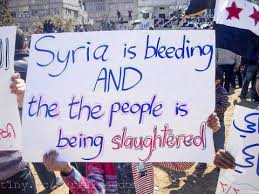 There are signs, according to a senior Western official, that support for the Syrian regime is brittle.

Anti-government protests have been staged at the funerals of soldiers in President Bashar al-Assad’s Alawi heartland.

Such reports have fed the hope of some Western governments that senior regime figures are prepared to turn on President Assad and negotiate a future without him.

But the head of the Syrian delegation, Foreign Minister Walid Muallem was having none of it when he arrived in Montreux on Tuesday night.

Discussion of Mr Assad’s future was a “red line” that could not be crossed, he told the Syrian state news agency.

“Nobody can touch the presidency.”

That is not the basis on which these talks are supposed to take place – the “Geneva I” declaration of the need for a political transition.

The opposition were strong-armed into coming here to discuss how, not whether, President Assad should go.

It is then, in the words of the British Foreign Secretary William Hague, hard to understate the magnitude of the task in Montreux.

“It would be wrong to expect progress in the next few days in the sense of major breakthroughs,” he said.

“These are two sides coming to a conference with very differing views of what they are prepared to do.”

Mr Hague went on: “Of course expectations are pretty low. Nevertheless things can be achieved once diplomacy starts.”

There is the view that getting the Geneva process underway is an achievement in itself.

In almost three years of civil war, there has never been a dialogue between the regime and the opposition.

But even if such a dialogue begins here in Montreux, the opposition figures doing the talking do not, by and large, speak for the armed groups doing the fighting.

There was, briefly, the tantalising prospect – held out by some American officials – that representatives of some key armed groups would attend.

But that does not seem to have happened and it is a serious problem.

What value is any agreement if it is not observed by the fighters on the ground?

“If any of them come here,” one commander told me, speaking of the Syrian National Coalition, “I will hang them.”

And most armed groups now are Islamist in character.

They are fighting for Sharia law, not democracy, the objective of the peace process sponsored by the US and Britain.

Some groups are part of al-Qaeda, the Nusra Front and the Islamic State, or Isis. They will keep fighting whatever progress might be made in the talks.

What then can be achieved by these talks?

No-one really expects a peace deal in Switzerland this week.

But optimists hope that a durable ceasefire might eventually emerge. There has never been a prospect of that in almost three years of Syria’s civil war.