Talks over Syria are set to begin without Iran 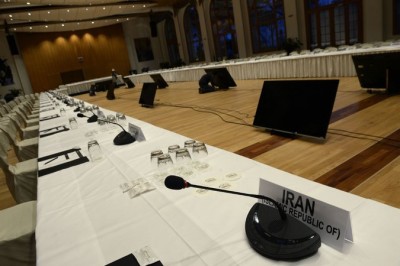 American and other Western diplomats on Monday managed to salvage the long-awaited peace conference on Syria, which had seemed on the verge of unraveling before it even began when Ban Ki-moon, the United Nations secretary general, issued an unexpected invitation to Iran to attend.

The possible presence of the Iranians infuriated Syrian opposition leaders, who said they would not attend the conference. But after a day of intensive consultations in which American officials made clear their unhappiness with Mr. Ban’s move, Iran was disinvited, and diplomats affirmed the conference will begin in Switzerland on Wednesday.

The 24-hour controversy, while a diversion from the main issues about Syria’s future that will be on the table there, seemed a fitting prelude for what even the most optimistic American diplomats say will be prolonged, grinding and uncertain negotiations in which the combatants in the Syrian civil war are scheduled to meet face to face for the first time.

“I don’t think that anyone who’s dealt with Syrian officials has any false expectations of rapid progress,” a senior official at the State Department said on Monday, in one of the day’s more optimistic assessments. “This is the beginning of a process. It is not going to be fast.”

It is, in fact, hard to imagine a peace conference that has been convened under less propitious circumstances.

Secretary of State John Kerry announced during a trip to Moscow in May that the United States, along with Russia, wanted to convene the peace conference, an idea first discussed the year before in Geneva. But since that announcement, President Bashar al-Assad of Syria has strengthened his military position, the fractious opposition has become more divided, and Russia and the United States have differed on how to interpret the mandate for the meeting.

The United States’ leverage over the Assad government, meanwhile, has declined. Mr. Kerry arrived at the State Department last year declaring his intention to change Mr. Assad’s “calculation” about his ability to hold on to power. But the Obama administration withdrew the threat of force in return last fall for an agreement that requires Syria to eliminate its chemical arsenal, while the American effort to train and equip Syrian rebels, by all accounts, remained very limited.

“For any political conference to succeed in trying to defuse, much less settle, an intense conflict, the ground has to be laid,” said Dennis B. Ross, a former Middle East envoy. “An agenda needs to be agreed, the parties have to want some minimal achievement, the convening co-sponsors have to share some basic goals, and there has to be sufficient leverage on those doing the fighting to permit some compromises to be made. Most of these conditions are lacking.”

Added a Western diplomat involved in preparations for the talks: “We don’t have a Plan B.”

Unlike the Middle East talks, in which Mr. Kerry set a nine-month goal for completing a peace treaty, there is no target date for completing the Syria peace talks or establishing a transitional administration that could take over if Mr. Assad agreed to relinquish power. In a closed-door meeting with the Syrian opposition last year, Mr. Kerry noted that Vietnam peace negotiations had gone on for years.

Despite the enormous obstacles, the State Department asserts that the talks are worth holding because the push to establish a transitional body to govern Syria, a main goal of the conference, might encourage defections among Mr. Assad’s traditional supporters, including the Alawite sect, of which he is a member.

“There are elements inside the regime itself, among its supporters, that are anxious to find a peaceful solution, and we’ve gotten plenty of messages from people inside; they want a way out,” the State Department official said.

“That’s the whole point of their going to Geneva,” the official added, referring to officials of the Syrian opposition. “To promote the alternative, the alternative vision.”

But if that is the goal, Mr. Assad has sought to redefine the purpose of the talks before they have even begun. In comments published on Monday byAgence France-Presse, Mr. Assad said that the purpose of the meeting should be to discuss ways to fight terrorism and that it was “totally unrealistic” to think that he would ever share power with the opposition that is living in exile.

At the same time, American officials say, Syrian forces have carried out a display of force by stepping up their attacks in Syria and have continued to bomb Aleppo, its largest city.

A recent announcement by the Syrian government that it was prepared to accept a cease-fire in the bitter battle for Aleppo, American officials report, contained an enormous catch: It requires rebel fighters to vacate the city, where many of their families reside, so it could be controlled by Syrian forces.

To get even this far required a day of intensive diplomacy after Mr. Ban announced on Sunday night that the Iranian foreign minister, Mohammad Javad Zarif, had agreed to the mandate for the conference and that Iran would be invited to attend.

American officials said that Mr. Kerry had told Mr. Ban before his announcement that Iran needed to publicly endorse the 2012 communiqué that laid the basis for the conference, which stipulates that the goal of the meeting is the establishment of transitional administration by “mutual consent” of the Assad government and the Syrian opposition. Mr. Kerry was described by an American official as having been furious after Mr. Ban’s news conference.

For the Syrian opposition, the invitation to Iran was a major insult. Iran’s paramilitary Quds Force has been helping Syrian forces in their campaign in Aleppo, opposition officials said, and training Mr. Assad’s militias. Now a belligerent in the conflict would be attending a peace conference that the opposition already feared might be unproductive.

But after Iran declined to publicly endorse the communiqué on Monday, the United Nations withdrew the invitation, and the conference was back on track.

The controversy played out on the same day that the temporary agreement to constrain Iran’s nuclear program went into effect. But American officials say the United States has received no communications from Iran complaining about the withdrawal of the invitation or linking the Syria issue to the nuclear negotiations. As a general rule, Iran and the United States have compartmentalized the nuclear talks and have engaged in little discussion of regional issues, even in their back channel negotiations.

The Syria conference will begin on Wednesday with a round of addresses by Mr. Kerry and his counterparts in the Swiss town of Montreux. On Friday, the conference will shift to Geneva, where a delegation of Syrian opposition officials will sit down with a team sent to represent Mr. Assad.

Attending the meeting carries risks for both sides. For the government delegation, a hotel lobby teeming with foreign journalists, Western diplomats and Syrian opposition members is an opportunity to sell its message, but anyone suspected of talking about possible participation in a transitional body could face repercussions at home.

The opposition coalition, for its part, risks a further erosion of influence with fighters inside Syria for sitting down to talk with Mr. Assad’s delegation. The opposition has yet to release the names of its delegation and its several dozen advisers, but they are said to include only a small number of military commanders.

An immediate question is whether the talks will lead to the opening of aid corridors, prisoner exchanges or local cease-fires. The matter is important to address the deteriorating humanitarian situation in which the Assad government has imposed blockades on the delivery of food, medicine and aid to try to drive its opponents into submission. But such measures would also be intended to create an environment for an eventual political accommodation.

Sergey V. Lavrov, the Russian foreign minister, announced last week that the Syrian government was making a significant gesture by opening aid channels to two besieged towns, Al Ghezlaniya and Jdaidet al-Shibani. But the State Department official said the towns had long been under the control of the government and had not been blockaded.

A convoy was allowed on Saturday to deliver aid — a tiny fraction of what is needed — to the Yarmouk camp for Palestinian refugees. But East Ghouta, a Damascus suburb of 160,000 people, remains cut off from food, medicine and other supplies.

A Western diplomat who follows Syria said he was exasperated with both the opposition and the government for placing new conditions and making aggressive statements at the last minute — possibly squandering a chance to ease the suffering of Syrian civilians.

“This proves that anybody pretending that he is representing the Syrian people is lying and misleading, and doing this either to preserve his power or to acquire power,” the diplomat said. “We’re headed this way: By the end of summer we’ll be talking about 150,000 to 200,000 dead.”