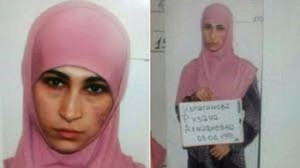 A video threatening attacks on the Winter Olympics in Sochi, Russia, and the reported spotting of a suspected “white widow” volunteer for suicide bombing intensified security concerns for the event and prompted U.S. military plans to evacuate Americans in a worst-case scenario.

Russian and international media reported Monday that security forces in Sochi had circulated bulletins to hotels and event sites in the Black Sea resort warning that several widows of Caucasus separatist fighters were suspected of trying to reach Sochi to carry out suicide attacks to discredit the Games’ Russian hosts.

One of the so-called white widows, Ruzana Ibragimova, is believed to have arrived in Sochi on Jan. 10 or 11 and has been spotted in central Sochi in recent days, security analyst Alexander Valov said he was told by an official of Russia’s FSB federal security force, the Moscow Times reported.

Agence France-Presse reported from Sochi that “wanted” posters had been circulated depicting four women suspected of being engaged in terrorist plots to press the independence causes of Muslim populations in the Caucasus Mountains region that are agitating for an Islamic-ruled state.

The Pentagon will have two warships and a number of C-17 transport aircraft on standby in the region to assist Russian security services in responding to any terrorist attack, CNN quoted an unnamed U.S. security official as saying.

Any role for U.S. military personnel in getting help to the estimated 15,000 Americans expected to travel to Sochi for the Games would be contingent on Moscow’s request for assistance, the official told CNN.

“We can’t do anything without the permission of the Russian services,” said Mike Baker, a former CIA covert operations officer also interviewed by the network. He described the Russian security operations as “very nationalistic,” with the view that responsibility for protecting the Games’ venues is “their turf.”

Russian and Western services should be working together to ensure effective security preparations, Baker said, but he added “that cooperation does seem at this point to be lacking.”

His criticism followed similar appeals over the weekend from senior U.S. politicians worried about the safety of U.S. athletes and spectators at the Winter Olympics, which begin Feb. 7.

“The Russian government needs to be more forthcoming with us,” Rep. Mike Rogers (R-Mich.), chairman of the House Intelligence Committee, told CNN on Sunday.

Terrorist attacks in Volgograd that killed 34 people last month were the work of Caucasus militants fighting for a separate state in the region, according to a video posted online Sunday by a group identifying itself as Vilayat Dagestan. Two men claiming responsibility for the suicide bombings in Volgograd, formerly known as Stalingrad, are seen on the video preparing their explosives and setting off for the city.

The video also warns that the Caucasus separatists are preparing “a present” to be sent to Sochi, about 400 miles southwest of Volgograd, an allusion to planned terrorist attacks.

President Vladimir Putin sought to assure news media Sunday that his nation’s security forces had the preparation for the Olympics well in hand. He said 40,000 police and special-forces troops had been deployed to Sochi and professed confidence that they would be able to thwart any terrorist plot.
Some Russian analysts were also critical of the Kremlin’s go-it-alone approach.

“It seems the Russian secret services do not understand that maintaining control over everyone and everything (essentially the idea inherited from the Soviet past) and preventing a terrorist attack are far from being the same thing,” wrote Andrei Soldatov, an investigative journalist and security analyst who co-founded the Agentura.ru news site.

Photo: Ruzanna Ibragimova, the “white widow” of a dead terrorist, has reportedly travelled to Sochi where US counterterrorism agents are helping to locate her.