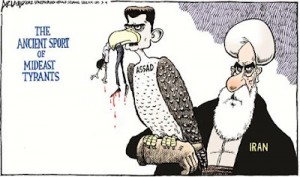 Iran did not “announce officially and openly its agreement (to)… the creation of a transitional government,” said a Saudi official statement on Monday.

This, along with the presence of Iranian “military forces fighting alongside (Syrian) regime troops” renders the Islamic Republic “unqualified to attend” the international peace conference on Syria that opens on Wednesday in Switzerland, it added.

Iran, a key backer of Syrian President Bashar al-Assad and Saudi Arabia’s regional arch foe, said Monday that it will attend the peace talks but without preconditions.

Washington, London and Paris reacted immediately, saying Iran would have to clearly and publicly support the idea of a Syrian transitional government if it wanted to attend.

Western powers have so far opposed Iran’s presence on the grounds that Tehran had not accepted an initial communique adopted by major powers in Geneva in June 2012 calling for the creation of an interim government.

Iran has strongly resisted pressure to accept the communique.

The Saudi statement said of this week’s conference that “its main role is to implement Geneva I.”

Regional powerhouse Saudi Arabia and other Arab states of the Gulf have repeatedly voiced support for rebels fighting Assad’s regime.

Saudi Arabia’s intelligence chief Bandar bin Sultan told Russian President Vladimir Putin last month that Riyadh would send a delegation to the meeting, but only on the condition the opposition is represented by its Saudi-backed National Coalition.

Riyadh shocked the international community by announcing on October 18 that it would not take up a seat it was awarded at the UN Security Council, citing the council’s failure to act on the Syria conflict.