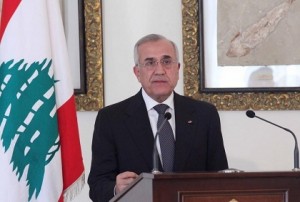 President Michel Suleiman hailed on Monday after a meeting with the diplomatic corps at the Baabda palace Saudi Arabia’s grant to the Lebanese army, hoping that the international community will continue to support Lebanon’s stability.

“A national defense strategy is beginning to take shape through the Saudi grant.” He said, adding

“Lebanon requires the support of foreign powers to achieve stability and encourage local powers and influential countries to distance the country from regional developments.”

Suleiman announced towards the end of December that Saudi Arabia has pledged $3 billion to buy arms for the Lebanese Army from France to help support and strengthen the military.

“I am pleased to announce to the Lebanese people that Saudi King Abdullah bin Abdel Aziz Al Saud has decided to offer Lebanon a generous grant of $3 billion to help the Lebanese Armed Forces receive new weapons,” the president said in a televised address to the nation on December 29, 2013.

“Enhancing the army’s capabilities is a unifying national and popular demand and a source of pride and it is a dream that I always had during my 41 years of military service, and it is the dream of every Lebanese since independence to confront the Israeli threat, protect democracy, face terrorism and put an end to the proliferation of arms,” said the president.

Suleiman described the move as “the biggest support in Lebanon’s history,” pointing out that it is “sufficient to enable the army to perform its missions.”

Suleiman also revealed that another 1.6 billion dollars might be offered during an international meeting in Italy in 2014.

“The initiative is an honest reflection of the kingdom’s efforts to preserve Lebanon,” Suleiman added.

The Iranian backed Hezbollah militant group was reportedly unhappy about this development, since it insists that the Lebanese defense strategy should be based on the formula army + people + resistance . Hezbollah refers to itself as” the resistance.

In an interview with LBCI TV following the announcement of the Saudi grant , caretaker Defense Minister Fayez Ghosn who is strongly allied with the Syrian regime and Hezbollah said his Hezbollah-led March 8 alliance has certain concerns that “the donation to the army might be part of the domestic political bickering in the country.”

Suleiman whose six-year term ends in May pledged to hold the presidential elections and avert political vacuum, saying that Lebanon relies on foreign powers to support it to achieve this goal.

“I am certain that the international community will support these efforts in order to preserve the country’s democracy,” he remarked.

Addressing the efforts to form a new government, Suleiman told reporters : “The cabinet will not be established in the next 48 hours.”

“The weekend will be decisive over this matter,” he said