Geagea: “preparations to assassinate me are ongoing.” 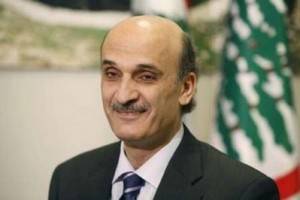 Lebanese Forces leader Samir Geagea commented on Monday over his security situation by telling , Al-Arabiya that preparations to assassinate him are ongoing and citing the spy drones flying over his residence in Maarab.

“preparations to assassinate me are ongoing.” He said

“There are spy drones flying over my residence Maarab as part of a policy of intimidation against March 14, but they know they will not lead to anything with me, they will not be able to assassinate me.” He added

Geagea stressed that he has contacted Lebanese Armed Forces Commander General Jean Qahwaji, who was “very cooperative, and confirmed to me that these planes are neither Lebanese nor Israeli, which usually hover over the South or the Beqaa.”

This was in reference to the Hezbollah drones that the party obtained from Iran.

Geagea , who has been the most outspoken Lebanese politician  against  the Syrian regime and Hezbollah’s arms also said that he does not agree with the statement made by his ally, Future Movement leader MP Saad Hariri, regarding Hezbollah’s participation in the cabinet .

“I do not agree with Hariri’s statement even though I agree that steps need to be taken towards solving the situation,” Geagea told Al-Arabiya on Monday.

He also said that “the issue of cabinet formation is still being discussed within the March 14 alliance, and I hope the other political groups respond to the positivity shown by Saad Hariri.”

Geagea added that “these are the conditions for our participation in the cabinet…and if Speaker Nabih Berri wants the cabinet to be formed within the next week, then he must persuade his allies [to agree] with the political ‘entrance’ we have suggested to improve the current situation in the country.”

Future Movement leader MP Saad Hariri said earlier on Monday that he is putting aside his personal differences with Hezbollah in an effort to join a national-partnership cabinet that can safeguard the country.

Talks have intensified in the past week, as parties attempt to form a new government that would bring together the rival March 14 and March 8 alliances.