Hariri plans to return to Lebanon for November elections 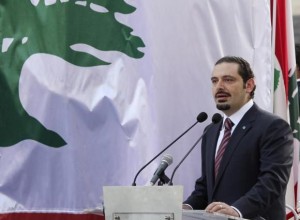 Former Lebanese Prime Minister Saad al-Hariri said on Monday he would return to Lebanon ahead of parliamentary elections later this year and was ready to work with his rivals for the good of the country.

Hariri, who has been living in exile between France and Saudi Arabia since 2011 when his government was toppled by Hezbollah, has been attending the trial in the Netherlands of four of its members charged with his father’s killing.

Lebanon, still struggling to recover from its 1975-1990 civil war, has been without a fully functioning government since Prime Minister Najib Mikati resigned last March.

A caretaker cabinet with minimal powers is running the country while parties try to reach a deal to form a government ahead of parliamentary elections due in November.

“I will return to Lebanon for the elections and so that one day I can be prime minister,” he told Europe 1 radio.

Until now Hariri has been reluctant to give any date for his return. But a conciliatory tone towards the powerful Shi’ite group would be a sharp turnabout for Hariri and his Future party, a Sunni Muslim group that supports the Sunni revolt against Shi’ite Muslim-backed President Bashar al-Assad in neighboring Syria’s civil war.

“Lebanon’s interest is more important than mine, he said when asked if he was ready to share power with his rivals.

Assad ordered Hariri’s assassination
He added that it was certain that Assad was behind the death of his father, former premier Rafik al-Hariri, whose 2005 car bomb assassination was widely blamed on Hezbollah.

“Everyone knows who gave the order. It was Bashar al Assad,” Hariri said. “One day we will go and get them (those responsible). They will pay,” referring to those facing trial.

He also blamed Assad for the assassination of one of his closest advisers, Mohamad Chatah, in December.

Syria’s war, which has claimed more than 130,000 lives, has inflamed sectarian division in Lebanon, especially since Hezbollah joined Assad in his three-year-old fight against majority Sunni rebels.

Syria peace talks are due to begin on Wednesday in Switzerland, setting up the first meeting between Assad’s government and its foes.

Assad must go
Hariri said the priority was for Assad to go.

“Assad must leave power. We cannot have a president like Assad at the head of Syria,” he said. “It’s the job of Russia and Iran to tell Assad to go because Syrians don’t want him.”

Photo:Lebanon’s former Prime Minister Saad al-Hariri speaks during a ceremony to unveil a statue of his father, Lebanon’s assassinated former prime minister Rafik al-Hariri, in front of the government palace in Beirut in this March 31, 2011 file photo. REUTERS/ Mohamed Azakir