200 killed in Syria bombing ahead of peace talks 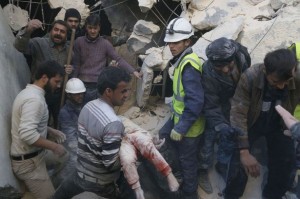 A child is pulled from the rubble after raids killed almost 200 people in Syria, just days before peace talks are due to start.

The weekend slaughter was caused by crudely made barrel bombs packed with explosives and dropped from helicopters on the city of Aleppo by forces loyal to President Bashar al-Assad.

Free Syrian Army fighters were powerless to protect women and children from the indiscriminate devices which left streets in flames.

An anti-Assad monitoring group, the Syrian Observatory for Human Rights, said the inaccurate bombs can collapse entire blocks of flats. Two months ago a similar raid on the suburbs is said to have claimed 500 lives.

Late on Saturday, a divided Syrian ­opposition narrowly agreed to join peace talks in Switzerland on Wednesday. Rebels have previously demanded the removal of Assad as a condition of discussions on a transitional government but he has said he has no intention of quitting.

More than 130,000 people have been killed and a quarter of Syrians driven from their homes in the conflict, which began with protests against 40 years of Assad family rule .

A shipment of just 200 food parcels was yesterday allowed through to Yarmouk, a camp of Palestinian refugees where 15 people have died of malnutrition under a seven-month siege.

UN Relief Works Agency spokesman Chris Gunness said the consignment would feed just 330 of the camp’s 18,000 residents for a month.

Britain has said Assad’s use of barrel bombs is “yet another war crime” which is clearly designed to terrorize civilians.

Photo: A child is pulled out from the rubble after raids by forces loyal to President Bashar al-Assad killed almost 200 people in Syria.