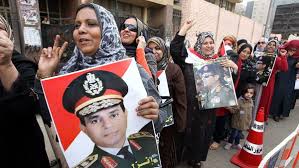 In the first poll since a summer coup ousted the country’s first freely elected leader, voters approved Egypt’s new constitution this week by an overwhelming majority of 98.1%, the country’s elections commission announced Saturday.

The passing of the new constitution is a milestone in Egypt’s rocky political transition, which began with the ouster of longtime dictator Hosni Mubarak in 2011 and took a turn when Islamist president Mohammed Morsi was pushed out of power last year.

Millions of Egyptians frustrated with his rule protested last summer against him, prompting Gen. Abdel Fattah Al Sisi to take control of the country. He suspended a contested constitution that was written during Morsi’s presidency and announced a new political roadmap that included this week’s referendum.

The charter, which was drafted by an appointed 50-member committee, will be adopted in the coming days. Fresh presidential and parliamentary elections are expected before the summer.

According to Egypt’s High Elections Commission, 38.6% of registered voters hit the polls this week — a figure slightly higher than the 33% that voted on the 2012 charter.

Turnout was a hot-button political issue in the referendum, since many Egyptians boycotted the vote. The Muslim Brotherhood, which was Egypt’s most powerful political force following the ouster of Mubarak and is now outlawed as a terrorist group, told would-be voters to stay at home, saying the vote was rigged.

Democracy International, a United States-based group that sent more than 80 international election observers across Egypt for the vote, expressed concern Friday about the political climate in which the referendum was conducted.

“A democratic transition should be characterized by an expansion of freedoms, but Egyptians have seen substantial restrictions on the exercise of their democratic rights,” said Eric Bjornlund, Democracy International’s president and head of the observation mission in Egypt, in a statement.

“There was no real opportunity for those opposed to the government’s roadmap or the proposed constitution to dissent,” the statement added.

Authorities heightened the crackdown on political opposition ahead of the poll, arresting some activists for campaigning against the proposed charter, Human Rights Watch said. Journalists have been thrown in jail, and posters supporting the new constitution were glued on billboards and buildings across the capital. Signs contesting the charter were nearly non-existent.

“Ultimately, a successful transition to democracy in Egypt will depend on meaningful opportunities for all political forces in the society to participate peacefully in a political process,” Democracy International said.

Photo: Egyptians lined up to vote on a new constitution under the watch of the security forces and military leadership of Gen. Abdel Fattah el-Sisi. Referendum observers Democracy International, expressed concern Friday about the political climate in which the referendum was conducted.