Maliki calls for world’s help as violence surges in Iraq 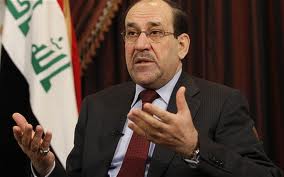 Prime Minister Nour al-Maliki reiterated his call for international support to stem the rising violence in Iraq after bombings across the country killed at least 40. Although the United Nations and US have expressed concern about the growing insecurity, leaders have been firm that it is the Iraqis’ job to bring calm.

Violence in Iraq has been on the rise, with the 2013 death toll reaching levels not seen since the height of the Iraq civil war in 2006-07. According to the BBC, nearly 8,000 civilians and just over 1,000 security forces were killed in Iraq last year, with 759 deaths tallied so far this year.

Today’s targets included a bombing at a funeral tent north of Baghdad. The victims were mourning the death of an anti-Al Qaeda Sunni militiaman, reports the Associated Press. Another attack took place in a market in the capital, among other bombings this week.

Reuters reports that the Army is “locked in a standoff with Sunni militants who overran Fallujah, a city west of Baghdad, more than two weeks ago in a challenge to Prime Minister Nour al-Maliki’s government.”

They are led by the Al Qaeda-linked Islamic State of Iraq and the Levant (ISIL), which is fighting in western Iraq and Syria to carve out a cross-border Islamist fiefdom.

“The battle will be long and will continue,” Maliki said on state television on Wednesday … “If we keep silent it means the creation of evil statelets that would wreak havoc with security in the region and the world.”

Earlier this week, United Nations’s Secretary General Ban Ki-moon visited Iraq, calling for the government to address the “root causes” of its conflict. Mr. Ban encouraged the strengthening of Iraq’s “social fabric,” through political participation, respect for the law and human rights, and democratic processes.

In response, Mr. Maliki said, “what is happening in Anbarhas no relation to Iraqi problems,” ruling out an attempt at dialogue with jihadists, according to Agence France-Presse. Maliki, a Shiite, has vowed to end the Al Qaeda-affiliated Islamic State in Iraq and the Levant (ISIS), butsays residents in the occupied, largely Sunni areas must force the group to leave.

Iraqi forces have surrounded Fallujah, about 45 miles west of the capital, but Maliki said on Sunday he is searching for a way “to end the presence of those militants without any bloodshed, because the people of Fallujah have suffered a lot.”

According to The Christian Science Monitor’s Dan Murphy, this comes down, in part, to politics in Iraq – which may not be a bad thing.

Prime Minister Nour al-Maliki from the Dawa Party, a Shiite Islamist political movement with close ties to Iran, has governed Iraq with intolerance and arrogance, stubbornly refusing to reach out to Iraq’s disenchanted Sunni Arab majority and dismissing almost all of the community’s political leaders who stand up to him as terrorists or friends of terrorists.

Though it may seem strange, this is good news. Because what’s happening in Iraq at the moment is not some atavistic expression of “ancient” hatreds and irreconcilable cultural differences. Instead, it’s a function of the failure of politics and power sharing in the modern era. And that’s the kind of failure that can be rectified if Iraq’s leaders, starting with Mr. Maliki, decide to change course from the politics of marginalization and exclusion.

To be sure, there’s been no sign of dawning wisdom yet.

Mr. Murphy goes on to note that when ISIS successfully ambushed Iraq’s Army north of Anbar Province in late December, the killings of senior officers “shocked the nation, with Sunni tribal figures in Anbar and elsewhere condemning the attack and vowing to stand with the Iraqi state against ISIS.”

It was a rare opportunity for the Maliki government to capitalize on a sense of national unity brought about by the death of the officers at the hand of Al Qaeda, Murphy notes.

The problem? Maliki used the attack as a pretense to go after Sunni Arab political protesters and political leaders.… All this had the thoroughly predictable result of infuriating Anbar’s tribes and clans, and saw many make common cause with ISIS, which made its gains in Fallujah and Ramadi [last] week….

But this sad state of affairs also points to a way out. In 2007, after years of futilely trying to beat fiercely independent Sunni Arab tribes into submission, the US realized that encouraging cooperation with jobs, money, and promises of national respect was a better course. The Sahwa was born. That’s a course that remains open to Maliki.

According to a separate Monitor story, some former US military officials are arguing that Al Qaeda’s return to the region could offer a valuable opportunity to take on the group. A retired colonel claimed that Al Qaeda “has been kind enough to come out of the shadows and present themselves as a target.”

Though US Secretary of State John Kerry has offered to help Iraq, he specified that this did not include US “boots on the ground.”

“This is their fight, but we’re going to help them in their fight,” Mr. Kerry said earlier this month.