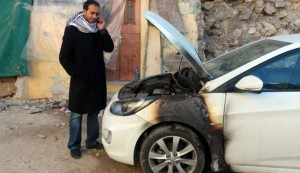 Israeli leaders have repeatedly denounced such attacks — the defense minister last week branded them ‘‘outright terrorism’’ — and the military says soldiers are under strict orders to stop them.

Still, critics say Israeli governments stacked with pro-settler politicians have often been reluctant to confront settlers, even those seen as a hardline fringe.

‘‘There is not enough pressure from the prime minister, the defense minister, the interior minister to prevent this,’’ said Gadi Zohar, a former senior army commander in the West Bank.

A dramatic incident near this Palestinian farming village last week highlighted the potential of such attacks to escalate and jeopardize fragile U.S.-led peace efforts. ‘‘Price tag’’ refers to settler attacks on Palestinians in response to army actions against any of dozens of West Bank settlement outposts.

Later that day, about 20 Israelis moved toward nearby villages, including Qusra. Palestinians said the settlers damaged olive trees, and were caught by villagers after a stone-throwing clash and held by them for more than two hours before being handed to the army.

Footage of the settlers surrounded by an angry crowd led the TV news in Israel that day, with commentators saying serious bloodshed was averted by Palestinians who shielded the settlers.

So far, there have been at least two cases of vandalism in apparent response to the Qusra incident. On Wednesday, residents of a village in the area reported that the door of a mosque was set on fire and some of the carpet was burned. Graffiti read, ‘‘Blood for blood, Qusra.’’

‘‘We believe that such hateful and provocative actions against a place of worship are never justified,’’ said State Department deputy spokeswoman Marie Harf. ‘‘We look to Israel law enforcement officials to quickly investigate and bring to justice the perpetrators of this attack.’’

Settlers have damaged hundreds of trees in Qusra, killed 18 sheep, torched six cars and set fire to a mosque in dozens of attacks, said Mayor Abdel Azim Wadi. The village has lost half its lands to settlements.

The mayor said Israeli soldiers either stand by during settler attacks or fire tear gas, rubber bullets and occasionally live rounds at Palestinians if the attacks escalate into stone-throwing clashes. A Qusra man was killed by army fire and dozens were wounded by settlers and soldiers, he said.

Palestinians say ‘‘price tag’’ is part of Israel’s policy of cementing control over the West Bank, the largest of three war-won areas the Palestinians want for a state. They note that Israel has been providing practical support for outposts even though they were set up without formal government permission.

‘‘Who gives them water, electricity, who gives them security, and paves their streets?’’ said Qusra resident Abdel Hakim Odeh, referring to the government’s policy toward the outposts. ‘‘These gangs are used by the government against the Palestinians.’’

Col. Eran Makov, deputy commander of an Israeli army division in the West Bank, said soldiers have clear orders to stop any violence between civilians in the territory. ‘‘The policy of the IDF … is to interrupt and stop every incident when a person attacks another person,’’ Makov said.

He said soldiers can’t be everywhere at once to block attacks and that it’s sometimes difficult to respond rapidly in rocky terrain. In last week’s incident, soldiers responded within 15 minutes, he said.

Makov acknowledged that young conscripts aren’t necessarily trained for policing jobs, but that those who fail to intervene face disciplinary action. The army is still looking into a Palestinian amateur video that appears to show soldiers watching as nearby settlers throw stones at Palestinians, he said.

Israeli military correspondent Amos Harel said the army faces a problem of mindset among young soldiers who view their basic mission as protecting settlers. ‘‘When extreme fringes among the settlers commit violence against Palestinians, few soldiers can internalize this and change their behavior,’’ Harel wrote in the Haaretz daily, saying it’s up to the senior command to set a different tone.

The military has overall authority in the West Bank and soldiers are usually the first to respond to unrest, while Israeli police deal with Israeli civilians, including investigating settler violence.

In Qusra and two neighboring villages, residents filed 21 police complaints between 2011 and 2013, but none led to indictments so far, said Yesh Din. Twelve cases were closed, including a February shooting in which 28-year-old Hilmi Hassan was seriously wounded in a confrontation with settlers.

Yesh Din said police were given photos of Israeli civilians who participated in the incident.

Hassan said a settler shot him in the stomach from about 20 meters (yards) away. Hassan was flown by helicopter to an Israeli hospital. There, police questioned him, but Hassan refused to sign a statement, fearing officers were trying to portray him as the instigator.

‘‘If a settler was shot, they would have imposed curfew on the entire area, but when a Palestinian like me is shot, they accuse him of provoking the settlers,’’ said Hassan.

Police did not provide arrest statistics or comment on the Hassan case.

The army said Palestinian complaints about settler attacks during the annual olive harvest dropped by half, to 20, from 2012 to 2013.

Despite such efforts, U.N. figures show a steady rise in the number of settler attacks.

Palestinians also initiate violence, including throwing stones at Israeli motorists. In 2011, Palestinians stabbed to death five members of a family, including three small children, in their settlement home as they slept.

The ‘‘price tag’’ campaign first made headlines in 2008, three years after Israel dismantled its settlements in Gaza and four in the West Bank. The government portrayed the unilateral pullback at the time as a tactical move to strengthen Israel’s hold on the rest of the West Bank, but it outraged settlers.

Some settlers devised price tag to deter Israeli authorities from taking down more settlements, particularly the outposts that are home to ‘‘hilltop youth,’’ the most fanatic among the settlers.

Since then, settlers have routinely attacked Palestinian villages whenever the army moves against an outpost. Vandals have broadened their targets to churches, mosques and dovish groups in Israel, as well as Israeli military bases.

The Yesha Council, an umbrella for more than 550,000 Israeli settlers, said it opposes violence and has distanced itself from price tag.

Settler leaders portray the vandals as hotheads, but Zohar and other retired security officers said in a report that the groups are organized, even if there is no apparent central leadership.

Zohar said it’s not clear if the events in Qusra will prompt a change.

Photo: A Palestinian man speaks on his mobile phone as he looks at his destroyed vehicle in the village of Madama, on January 8, 2014.The annual rate of Israeli settler attacks against Palestinians has almost quadrupled in eight years, U.N. figures show