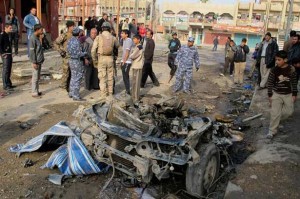 Four car bombs killed at least 25 people in Shi’ite Muslim districts ofBaghdad on Monday, police said, in violence that coincided with a visit to the Iraqi capital by U.N. Secretary-General Ban Ki-moon.

Although no group claimed responsibility, the bombings appeared to be part of a relentless campaign by al Qaeda-linked Sunni Muslim militants to undermine Prime Minister Nuri al-Maliki’s Shi’ite-led government.

The deadliest attack occurred in the mainly Shi’ite neighbourhood of Shaab in eastern Baghdad where a car bomb exploded in a commercial area, killing 11 people and wounding 28.

Police said 76 people had been wounded in the four attacks, which occurred in the evening when many people were out in the streets on a public holiday to mark the Prophet Mohammad’s birthday.

Last year was Iraq’s bloodiest since 2008, with nearly 9,000 people killed, according to U.N. figures.

Ban told a news conference after talks with Maliki that he was concerned about the spiralling bloodshed and urged Iraqi leaders to deal with its underlying causes.

On Jan. 1, Sunni militants overran the western cities of Falluja and Ramadi in a bold challenge to the government, alarming the United States, whose troops fought fierce battles with insurgents in Falluja in 2004.

Militants in central Falluja fired mortars at an army base outside the city on Monday and soldiers fired four shells back, killing two people and wounding eight, police and hospital sources said. There was no word on any army casualties.

Government officials trace the resurgence of Islamist militancy in Iraq to the civil war in neighbouring Syria, where al Qaeda branches have emerged as a powerful force among rebels fighting to overthrow President Bashar al-Assad.

However, critics of Maliki say his government bears much of the blame for exacerbating sectarian tensions by alienating Iraq’s once-dominant Sunni Muslim minority.

The latest crisis began in late December when Iraqi security forces broke up a Sunni protest camp near Ramadi and carried out a bloody raid to arrest an outspoken Sunni lawmaker there.

In an interview with Reuters on Sunday, Maliki ruled out a military assault on Falluja, which is still held by gunmen, saying he wanted to avoid more carnage and give Sunni tribesmen time to expel the militants themselves.