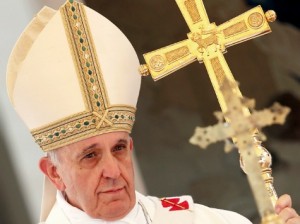 Pope Francis on Monday called abortion “horrific” and said it was part of a new “throwaway culture” he said wasted human life as easily as it wasted food — his strongest words yet on a practice that is a divisive political issue in the United States.

Until now, Francis has appeared to have stayed away from strong statements on the church’s stands on moral behavior of individuals, preferring to focus on more positive messages about the teachings of Jesus Christ and the need to see to the poor.

His comments during the start of his papacy that the church need not “obsess” about abortion and gay marriage bothered conservative Catholics who see the issues as ones that the church ought to object to strongly. On Monday, Francis put his own stamp on the church’s long-held opposition to abortion.

“It is frightful even to think that there are children, victims of abortion, who will never see the light of day,” Francis said in what has become a traditional annual address to the Vatican diplomatic corps.

The pontiff used blunt language on other topics as well, calling for the elderly and migrants to be treated with respect, and for children to be shielded from slavery, hunger and other types of exploitation.

Citing Latin Americans taking big risks to cross the border into the U.S., or Africans trying to reach Europe, he expressed sorrow for those who died before reaching their goal.

“We cannot be indifferent to those suffering from hunger, especially children, when we think of how much food is wasted every day in many parts of the world immersed in what I have often terms the throw away culture,” Francis said.

Father Alistair Sear, a retired church historian, said Francis is a man of firm opinion whether the topic be the favorite of liberals or conservatives.

“Nobody would say [Francis] shies away from controversy, but he is making a point of making strong statements on many of the modern church’s hot button issues,” Sear said.

People in Rome said they had already grown accustomed to Francis’ bold stances on issues and many thought he had made similar remarks in the past.

“This is the pope’s role, to protect human life and help explain and spread the church’s long held beliefs,” said Antonio Buzzanti, 55, a maintenance worker at a church just beyond the walls of the Vatican City.

Rosa Sella, 40, a Rome office manager, agreed: “If this is the first time he has used this kind of language then I am surprised,” she said. “But I am not surprised he said this. It’s the teaching of the church.”

Some conservative Catholic groups questioned whether Francis might be preparing to make some kind of change to the church’s teachings on abortion, after he told the Italian Jesuit magazine Civilya Cattolica the church should move beyond its “obsession” with polarizing teaching son abortion, contraception, and homosexuality, saying he preferred to practice mercy over condemnation.

That language is in contrast to remarks from Francis’ predecessors Benedict XVI and John Paul II, who regularly decried abortion from the pulpit, equating it with murder.