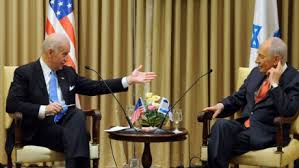 US Vice President Joe Biden on Monday urged Israel to seize this moment in history to make peace with the Palestinians in talks with President Shimon Peres.

At a working meeting after the two leaders paid their last respects to former Israeli prime minister Ariel Sharon, who was buried on Monday, the talk turned to the US-led direct peace talks.

“The one place (in the region) where there’s a possibility for an island of stability … is between the Palestinian people and the Israeli people, in two secure states respecting one another’s sovereignty and security,” Biden said in remarks relayed by the White House.

“And the president believes and I believe that this is one of those opportunities, one of those moments in history where it has to be seized.”

At the end of July, US Secretary of State John Kerry coaxed Israel and the Palestinians into their first direct peace talks in nearly three years, with the parties agreeing to a nine-month timetable for reaching a deal.

So far, there has been little visible progress, and Biden admitted there were some “very difficult decisions” ahead.

But he expressed confidence that Israeli Prime Minister Benjamin Netanyahu was “up to” the task and expressed hope that the same was true of Palestinian leader Mahmud Abbas.

“Israel’s ultimate security rests in a genuine accommodation with the Palestinians that it is born out of secure borders that are peaceful,” he said.

The US vice president arrived in Israel early on Monday to represent Washington at Sharon’s funeral, with Peres hailing his timing.

“Your coming is timely, important and moving. You came not only on a sad day but during days that Israel has to take tough decisions,” he said in remarks relayed by his office.

“All of us are aware that we have to take the decision now, that it’s tough and difficult but we have an open window and God knows when it will happen again.”

Biden then went for a dinner meeting at Netanyahu’s Jerusalem residence, although there was no immediate word on the content of their talks.

The last time Biden visited Israel was in March 2010 on a visit which was overshadowed by an Israeli announcement of plans to build 1,600 new homes in annexed east Jerusalem as Washington was trying to revive peace talks.

The move infuriated the White House and deeply embarrassed Netanyahu.