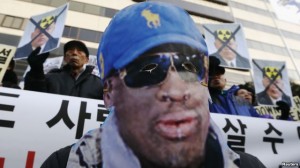 American basketball star Dennis Rodman’s trip to North Korea is not winning him many friends in South Korea.

South Korean social media sites are filled with sneering comments about the former National Basketball Association All-Star – accusing him of going to North Korea for money and calling him names like “psychopath.”

Rodman, who is on his fourth trip to North Korea, calls Kim his friend. This time, he brought along a group of former NBA players and others to play basketball with North Korean players, an effort in what Rodman calls sports diplomacy.

South Koreans were skeptical. “He is doing ding-dong diplomacy, which is useless. If you are doing basketball diplomacy, you should have a result because time has passed pretty much since you met Kim Jong Un for the first time,” Wolf10 wrote on the Korean website “Daum”.

Rodman said the proceeds from the game would be used for helping the deaf. But many were doubtful. “Don’t you really believe that it will be used for his people, not Kim Jong Un?” “JOEE” wrote on Korean website Nate.

And many South Koreans mocked Rodman’s on-camera outburst when a CNN journalist interviewed him about the trip and his relationship. Rodman also indicated that Kenneth Bae, an American who has been held by North Korea for more than a year, had done something wrong to justify his detention.

One comment said, “I think it is not sports diplomacy to sing “Happy Birthday” to him [Kim]. If you do, you can’t be so sensitive when you got the question from Chris Cuomo, the CNN anchor.”

Rodman has quite a number of fans in Korea, and many are disappointed by his trip to North Korea.

One fan, “Dhqk” wrote, “When he was active in his basketball game, I was really a big fan of him whom is pitted against other center players very well. But after his retirement, he seems to act as Kim Jong Un’s tool … I feel sad as a fan.”

The two countries have been divided for nearly 70 years. Communist North Korea is considered one of the most isolated and repressive nations on the world, while democratic South Korea is among the wealthiest advanced nations.

Some South Koreans are angry that Rodman won’t discuss international concerns about North Korea, such as its nuclear weapons program and its poor human rights record.

But a few posts saw a potential for good in the trip. NAVER blogger “Ssminss80” wrote, “It is hard for us to get information about North Korea. But, Rodman gave us information on how North Korea is. It is not totally bad.”

Clll**** wrote, “It looks like [they are] just having fun. Because North Korea’s treated him as a king, [a man] who is already a retired basketball player. What if … he wanted to dedicate to world peace and visit the North to conciliate and then become unified? He would deserve to win the Nobel Prize for peace.”

But at least one blogger had a sarcastic warning for Rodman, “You have to be careful you don’t want to be like a Jang Sung Thaek who was executed by his nephew, Kim Jong Un.”