Indian diplomat leaves U.S. after being indicted in N.Y. 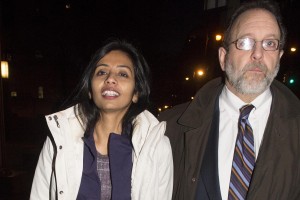 An Indian envoy was indicted Thursday for allegedly lying to get her New York City housekeeper a work visa, and she quickly left the United States after being granted diplomatic immunity.

Although 39-year-old Devyani Khobragade has left the country, the charges — visa fraud and making false statements — will remain active until she can be brought back to the United States, either through a waiver of immunity or her voluntary return, Manhattan U.S. Attorney Preet Bharara wrote in a letter to the judge.

The arrest and police treatment of Khobragade has ignited a firestorm in India and strained relations between Washington and New Delhi. On Wednesday, in a diplomatic tit-for-tat, the Indian government ordered American officials to shut down the restaurant, bowling alley and all commercial activities at the U.S. Embassy in the capital.

Khobragade is accused of lying on the visa application for her maid, paying her about $3 an hour — far less than the legal U.S. minimum wage — and forcing her to work for more than 40 hours a week.

She was arrested in December outside her daughter’s Manhattan school and claimed she was subjected to cavity- and strip-searches. Bharara said at the time that she was never handcuffed and never subjected to a body-cavity search.

He said Khobragade was “fully searched by a female deputy marshal — in a private setting — when she was brought into the U.S. Marshals’ custody, but this is standard practice for every defendant, rich or poor, American or not.”

Khobragade was freed on $250,000 bail, and her lawyer argued she should not face any charges and was protected by diplomatic immunity.

Indian Foreign Minister Salman Khurshid demanded that the charges be dropped, and he accused the housekeeper of truying to blackmail Khobragade.

In a statement last month, Bharara, who was born in India, defended the arrest.

“It is alleged not merely that she sought to evade the law, but that she affirmatively created false documents and went ahead with lying to the U.S. government about what she was doing,” Bharara said in a statement. “One wonders whether any government would not take action regarding false documents being submitted to it in order to bring immigrants into the country. … And one wonders why there is so much outrage about the alleged treatment of the Indian national accused of perpetrating these acts, but precious little outrage about the alleged treatment of the Indian victim and her spouse?”