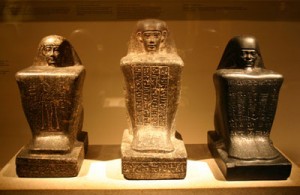 The Egyptian police have seized a hoard of more than 1,500 illegally excavated ancient artifacts, the Antiquities Ministry said.

The antiquities seized during a raid on a house in Zawiyat Abu Musallem, a Cairo suburb, on Monday included ancient statues, amulets and limestone false doors of the type commonly built in ancient Egyptian tombs as a threshold to the afterlife.

Turmoil in Egypt since the downfall of Hosni Mubarak in 2011 has allowed for increased antiquities theft and illegal digging: in August, thieves broke into a museum in southern Egypt, making off with more than 1,000 artifacts.

“The variety of the seized antiquities indicates that they are the result of illegal digging by armed gangs,” Ibrahim said.

Ammunition found in the possession of a suspect underscored “the danger of these organized gains that carry out digs in secret and trade illegally in Egyptian antiquities”, he said.