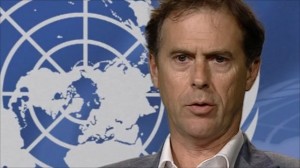 The U.N.’s human rights office has stopped updating the death toll from Syria’s civil war, confirming Tuesday that it can no longer verify the sources of information that led to its last count of at least 100,000 in late July.

Rupert Colville, a spokesman for the U.N. Office of the High Commissioner for Human Rights, blamed the failure to provide new figures on the organization’s own lack of access on the ground in Syria and its inability to verify “source material” from others.

“It was always a very difficult figure,” Colville said in answer to a question by The Associated Press. “It was always very close to the edge in terms of how much we could guarantee the source material was accurate. And it reached a point where we felt we could no longer cross that line. So for the time being, we’re not updating those figures.”

Colville said the total number of dead the U.N. had estimated was based on an exhaustive effort to verify six different figures supplied by a variety of nongovernmental organizations in the region.

“Over time, they’ve diminished in number,” he said. “For the past year or so, it’s been down to two or a maximum of three, and we simply didn’t feel that it was possible for us to continue in the same way.”

But Colville said the U.N. could not endorse anyone else’s count, including the widely quoted figures from the Britain-based Syrian Observatory for Human Rights, whose latest tally is more than 130,000 killed in violence in Syria since March 2011.