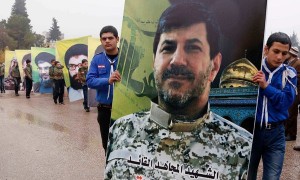 As a little girl, Noor did not know exactly what her father, Hassan Laqees, did for Hezbollah, but even then, she knew she might lose him early. During his long absences, she recalled recently, she would gaze at a photo of him lying asleep and imagine that she was seeing his corpse.

Last month, Mr. Laqees was gunned down in a southern Beirut parking garage by unknown assassins, and Noor, now 28 and an English literature teacher, learned along with the rest of the country who he was: Hezbollah’s master technician and logistics expert, eulogized by its leader, Hassan Nasrallah, as a beloved friend and one of the group’s “bright minds.”

Mr. Laqees joined Hezbollah at its founding in the 1980s as a 19-year-old with a penchant for technology, and he helped build an arsenal more sophisticated than those of many national armies, transforming the Shiite militia into a force that successfully challenged Israel in battle. He helped set up systems of surveillance drones and independent telecommunications, and he used secret bases inside Syria to store the long-range, sophisticated missiles that analysts say are now being funneled into Lebanon.

Israel’s Mossad spy agency put Mr. Laqees on a hit list years ago, identifying him as one of the five men it most wanted dead. From 2008 to 2011, four perished in cloak-and-dagger style. A car bomb in Damascus, Syria’s capital, killed Hezbollah’s military leader, Imad Mughniyeh. A sniper shot a Syrian general on a beach in Tartus. A Hamas official was strangled in a hotel room in Dubai, United Arab Emirates, by assassins who, in an embarrassment for Mossad, were photographed by elevator cameras. And an Iranian general was killed in an explosion at a Tehran missile depot.

Mr. Laqees was the last on that list to die.

Lebanese and Israeli analysts say that Israel, working through proxies, is the most likely suspect. Yet as Hezbollah shifted course over the past two years, sending its forces into Syria to support the government, its ally, against an armed uprising joined by foreign jihadists, Mr. Laqees earned new enemies. Even among some Shiites there were whispers of disapproval and concerns that the group had aggravated sectarian tensions and opened them up to retaliation.

So Mr. Laqees’s assassination has become a political whodunit infused with all the complexity of a convulsing region’s tangled and shifting alliances and enmities. Saudi intelligence officers, Lebanese Sunni militants, fighters from Al Qaeda, Syrian insurgents — all have been floated as possible killers. Analysts say that because of the secrecy of Mr. Laqees’s work and the professional nature of the killing, an intelligence service was probably involved. But even those least likely to have killed him have been eager to take credit.

Mr. Laqees stood in the cross hairs of several forces that have increasingly found common cause. Sunni-led Saudi Arabia, the Syrian insurgency it backs against President Bashar al-Assad, and Israel all find themselves in opposition to Hezbollah and its patron, Shiite-led Iran. Hezbollah and the Syrian government accuse Saudi Arabia of participating in a “Wahhabi-Zionist conspiracy,” a reference to the austere Wahhabi sect of Sunni Islam. Israeli and Saudi analysts agree that their countries share an interest in checking Hezbollah and Iran.

Mr. Nasrallah, Hezbollah’s leader, blamed Israel for the killing of Mr. Laqees, saying that early claims of responsibility by what most observers believe was a fictitious Sunni group were attempts to sow sectarian strife.

But Iranian officials also pointed fingers at a Qaeda-linked militant group led by a Saudi fugitive recently captured in Lebanon. Adding to the uncertainty and mystery, that group, the Abdullah Azzam Brigades, claimed last week that Mr. Laqees actually died in the bombing of Iran’s Beirut embassy in November.

Syrian rebels claimed that they had killed him in Syria and that the Beirut crime scene was a cover-up. There were even rumors that he was killed by Hezbollah comrades in an internal dispute or betrayal, both of which would be unusual in the highly disciplined organization.

Ali Rizk, Beirut news director of Press TV of Iran, said that Mr. Laqees’s death showed that the atmosphere of hostility toward Hezbollah created opportunities for its enemies. Ronen Bergman, an Israeli security expert who detailed Mossad’s hit list in his book “The Secret War With Iran,” said Israel often uses local proxies in countries too risky for its own agents.

Mr. Laqees also lived on the fault lines of the unease in Lebanon over Hezbollah’s intervention in Syria, something that emerged as his death revealed rare glimpses of a senior Hezbollah operative’s character and personal background.

The group frowns on sharing such details, preferring to portray its warriors, as Mr. Nasrallah did Mr. Laqees, as people who have “no other life,” who are “dissolved in the resistance.” But perhaps because his death was a cathartic moment for a community that has had to remain quiet as many of its fighters have died in Syria, some opened up, just a crack, about him.

Mr. Nasrallah spoke of their youth together in Baalbek, where a picture of Mr. Laqees as a grinning, curly-haired teenager hangs on a cemetery wall. A street lined with houses, a blacksmith shop and pomegranate trees is called Laqees Alley after his family, a Baalbek merchant clan that made fortunes in Liberia and built a mosque and a downtown shopping mall.

“It’s not only the party who was sad for him,” said one relative who is not a member, “but all of Baalbek.”

People knew he was connected to Hezbollah, but never suspected his importance; he never traveled with bodyguards. One acquaintance said that recently he seemed more cautious, declining to visit when strangers were present.

Another said cousins in Hezbollah had told him that Mr. Laqees once had ambitions to succeed Mr. Mughniyeh, the slain commander, and that he had a cousin who had been central to the capture of Israeli soldiers that sparked the 2006 war.

Baalbek is a religiously mixed town where a significant minority of Shiites is less loyal to Hezbollah than to tribal clans or other parties, and where extended families, including Mr. Laqees’s, include people on both sides of that divide. Some openly question Hezbollah’s choice to use its militia, which the government tolerates as a deterrent to Israel, against fellow Arab Muslims.

As part of Hezbollah’s technical cadre and not its religious or political leadership, Mr. Laqees was socially comfortable with such independence, residents related to or friendly with the family said.

A brother-in-law, Hikmet Awada, praised him on Facebook while contrasting their politics, writing, “My only care is Baalbek; his borders start from Lebanon and go to the wide land of God, from Palestine to Iran, Iraq, I don’t know where.”

The other relative said that she had often tried to provoke Hezbollah relatives and friends into revealing their feelings about the Syria operation, to no avail; she said the fighters would call their wives from the battle in Qusayr, just over the border, then come home “as if they had been on a picnic.”

Mr. Laqees was known for educating his daughters and “spoiling them more than the boys,” she said. His eldest, Noor, was part of a group of young female teachers at a Hezbollah school who sometimes questioned, among themselves, the costs of the Syria mission that had killed so many young men, a relative of one teacher said, emphasizing that he did not know Noor’s views.

At a condolence ceremony, Noor, an open-faced, poised woman, glowed with pride in her father. His death was a great loss, she said, recalling how her son, his favorite grandchild, used to rush into his arms on his visits. But, she said, she supported his commitment.

Asked about Syria, she said sharply, “I don’t care about that,” then quickly added, “I can only talk about my father.”

Asked if Syria had anything to do with his death, she said, “Hajj Hassane had only one enemy: Israel.”