Why Hezbollah’s new missiles are a problem for Israel ? 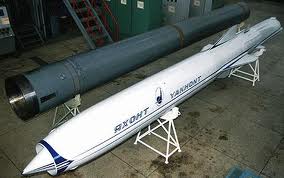 Israeli defense officials have eyed the nearly three-year Syrian civil war warily, concerned that a faltering Assad regime may try to offload some of its advanced weaponry to its Hezbollah allies in Lebanon rather than let it fall into the hands of rebel forces. Today, the Wall Street Journal reported that, despite Israeli efforts to prevent Syrian weapons transfers to Lebanon, U.S. officials believe that Syrian forces have managed to smuggle advanced guided missiles to its Lebanese allies.

The new weapon in Hezbollah’s arsenal keeping Israeli officials up at night, according to the Wall Street Journal, is a set of Russian Yakhont anti-ship cruise missiles. Russia delivered 72 Yakhont missiles to Syria in December 2011, along with 18 mobile launch vehicles designed to be stationed along the coast, and Syrian state news televised the Syrian Navy test-firing the missiles. Moscow then followed up in May 2013 with an additional shipment of even more advanced, more accurate, radar-equipped Yakhont missiles. They have a range of about 180 miles, fly close to the sea at Mach 2 to evade radar, and are usually armed with an armor-piercing or high-explosive warhead.

Syria’s arsenal of Yakhont missiles has raised anxieties in the Israeli Navy since the purchase from Russia. Israeli warships actually began testing the Barak 8 missile defense system in 2011, prior to Russia’s delivery of the weapons, specifically to defend against advanced anti-ship missiles like the Yakhont. Israel has been acutely concerned about the Yakhont missiles falling into the hands of Hezbollah, which has an established history of firing rockets across the border into Israel. Mostly these have been unguided rockets, like the short-range Katyushas and Iranian-made Fajr rockets that Hezbollah used in its 2006 conflict with Israel. The Yakhont missiles, though more suited to firing on vessels at sea than land-bound targets, would be a marked upgrade in the range and accuracy of Hezbollah’s arsenal. Placed near the Israeli northern border with Lebanon, the missiles’ range would extend nearly all the way across the country, past Gaza to the Sinai Peninsula. But beyond range, it’s the radar guidance that has IDF planners worried.

Which is why Israel has gone to great lengths to avoid them falling into the wrong hands. In 2013, Israel is believed to have conducted at least five airstrikes against Syrian weapons stockpiles that intelligence officials believed might be transferred to Hezbollah. Reports at the time suggested some of these attacks were targeting chemical weapons supplies, but theWall Stree Journal reported today that the strikes targeted Russian-made anti-aircraft missiles, Iranian-made rockets, and in July and October, Syria’s Yakhont missile arsenal.

According to U.S. officials, that didn’t do the job, and Syrian smugglers have passed the Yakhont missiles to their Hezbollah allies, component by component — as many as 12 missiles may now be in Lebanon. But they’re not operational, yet; the report suggests that Hezbollah does not have the means to launch the missiles.

The United States has warned Russia from time to time about its delivery of new weapons to Syria as the civil war has dragged on. Russia has consistently replied that they are fulfilling deals inked years ago — the arrangement for Syria to purchase the Yakhont missiles, as part of the larger Bastion coastal missile system, was signed in 2007. But, as U.S. officials have warned for months, the transfer of those missiles to Hezbollah constitutes a violation of the deal’s “end user agreement,” which stipulated that the weapons could not be given to any other country or group. If the intelligence that Syria has managed to smuggle 12 guided missiles into Lebanon is accurate, the Assad regime is now pretty flagrantly in violation of that agreement — but it’s unclear if there will be any immediate consequences for that.