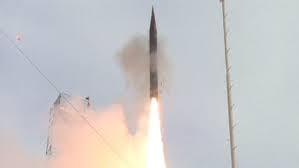 Israel successfully tested its upgraded Arrow missile interceptor for the second time on Friday, pushing forward work on a U.S.-backed defense against ballistic threats it sees from Lebanon’s Hezbollah guerrillas as well as from Iran and Syria.

One of several elements of an integrated Israeli aerial shield, Arrow III is designed to deploy kamikaze satellites – known as “kill vehicles” – that track and slam into ballistic missiles above the earth’s atmosphere, high enough to safely disintegrate any chemical, biological or nuclear warheads.

Iran and Syria have long had such missiles, and Israel believes some are now also possessed by their ally Hezbollah, whose growing arsenal in Lebanon, stocked in part by Damascus, preoccupies the Israelis as their most pressing menace.

Friday’s launch of an Arrow III interceptor missile over the Mediterranean was the second flight of the system, but did not involve the interception of any target, officials said.

Israel deployed the previous version, Arrow II, more than a decade ago, rating its success in live trials at 90 percent.

“The Arrow III interceptor successfully launched and flew an exo-atmospheric trajectory through space,” Israel’s Defense Ministry said in a statement.

Yair Ramati, head of the ministry’s Israel Missile Defense Organisation, told reporters that as part of the test, which was attended by U.S. officials, the interceptor jettisoned its booster and “the kill vehicle continued to fly in space (and) conducted various maneuvers … for a couple of minutes”.

Israel predicts Arrow III could be deployed by next year. The Pentagon and Boeing are partners in the project run by state-owned Israel Aerospace Industries (IAI).

Arrow is the long-range segment in Israel’s three-tier missile shield. This also includes the successfully deployed “Iron Dome”, which targets short-range rockets and mortar bombs favored by Palestinian guerrillas in Gaza, and the mid-range “David’s Sling”, which is still under development. They can be deployed alongside U.S. counterpart systems like the Aegis.

The United States and Israel have been jointly working on Arrow since 1988. Washington says helping Israel build up the capability to shoot down missiles staves off escalatory wars – or preemptive Israeli strikes – in the Middle East.

Israel also sees it as a means of weathering enemy missile salvoes while it brings its offensive capabilities to bear.

“Developing such systems will let Israel maintain routine life despite the threats facing us, and will assist the IDF (Israeli military) in prevailing in combat quickly and efficiently, if required,” Defense Minister Moshe Yaalon said on Twitter.

Israel is assumed to have the region’s sole atomic arsenal, as well as delivery systems including long-range missiles, and has been bolstering defenses as potential threats proliferate.

It worries about Iranian ballistic missiles, whose number it estimates at around 400 – especially given the possibility Tehran could eventually produce nuclear warheads for them. Iran, which denies seeking the bomb, is negotiating with world powers about curbing its disputed nuclear program.

The civil war in Syria has raised questions about President Bashar al-Assad’s control over his own ballistic Scud missiles. Israel says Damascus has used around half of these against Syrian rebels. Separately, Assad is decommissioning chemical weapons with which Syria’s missiles might have been armed.

Such efforts may have had limited efficacy, however.

Briefing Reuters, a senior Israeli official estimated that Hezbollah now has between 60,000 and 70,000 rockets and missiles deployed throughout Lebanon, including a few dozen Syrian-supplied Scud Ds with ranges of 700 km (440 miles).

Hezbollah may also have hundreds of Fateh-110 missiles with ranges of 250-300 km (160-190 miles), the official said. Among the targets of the Israeli strikes on Syria last year, security sources said, was a shipment of Fateh-110s meant for Hezbollah.

“It’s the most significant threat facing Israel today,” the official said of the Hezbollah missiles.

“We believe more than half the rockets and missiles are operational. They are on launchers, ready for launch. It’s just a matter of a decision.”

Hezbollah confirms building up its arsenal since its 2006 border war with Israel. It does not give details of the arms.

The Israeli official, who declined to be identified by name given the sensitivity of the issue, was circumspect on how Israel’s three-tier shield would function in a major missile exchange, which single-interception trials do not simulate.

“You need to pass this test – of a few dozen of them landing, in real time – to be able to speak about it with more certainty,” the official said.