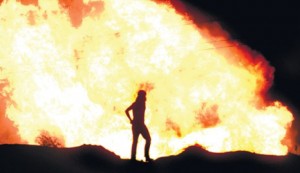 Explosions hit two large Syrian gas pipelines on Friday near Damascus and the central city of Homs, cutting electricity supplies around the capital and in Mediterranean provinces, officials and activists said.

Video uploaded by activists of the Damascus blast showed a bright glow on the horizon, beyond several unlit buildings.

SANA said the Damascus attack caused a massive fire and that the Electricity Ministry reported gas supplies to two power stations in the area were cut, causing an electrical outage across southern Syria.

The second explosion, near the border town of Tel Kalakh east of Homs, caused a fire which could be seen across the frontier in Lebanon, Lebanese media reported.

Abbas said the pipeline supplied a power station in the Mediterranean city of Banias. The Syrian Observatory for Human Rights, a British-based monitoring group, said electricity was cut in Banias, Tartous and parts of Homs.

There have been frequent attacks on oil and gas pipelines during nearly three years of conflict in Syria. SANA said the Damascus pipeline was struck twice in the second half of December.