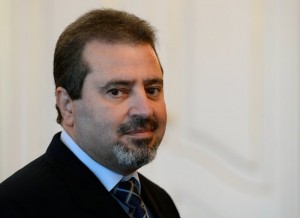 Illegal weapons have been found inside the northern Prague residence of a Palestinian diplomat who died Wednesday of injuries suffered when he opened a safe in the living room and an explosion occurred, police said Thursday.

She would not say how many weapons were found or where they may have come from. In the Czech Republic, all firearms must be registered with authorities; possession requires a permit.

Police said Wednesday that al Jamal died after an explosion possibly related to his improper handling of a safe inside his house in the neighborhood of Suchdol.

He died after he was taken to Prague Military Hospital.

“The explosion was most likely caused by dangerous or unqualified manipulation with the safety box by the ambassador himself,” Zoulova said Wednesday. “The explosive device was probably part of the safety mechanism of the safe.”

She added that authorities had found evidence of explosives in the debris.

However, police have ruled out any “criminal involvement of a third person intending to kill a particular person,” she said Thursday. She had said Wednesday that the incident was not related to terrorism.

The Palestinian Foreign Ministry announced that the explosion occurred minutes after al Jamal opened an old safe that had been moved from the old diplomatic mission to his two-story house, which was being readied to house the new diplomatic mission.

A high-level delegation sent by the ministry arrived in Prague on Thursday to help with the investigation.

The couple’s son, who was also in the house at the time of the blast, was not hurt.

Al Jamal had been a diplomat in the Czech Republic since last October, CTK said.