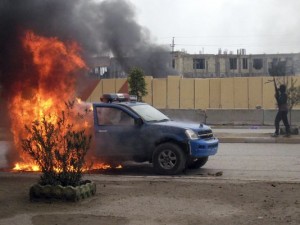 Al-Qaeda militants, emboldened by their powerful role in attempting to topple the government in neighboring Syria, have been exploiting a sense of alienation among many minority Sunnis in Iraq.

“It’s a perfect storm that’s been brewing for a long time,” said Ryan Crocker, a former U.S. ambassador to Iraq.

The violence was touched by recent incidents that have angered Sunnis and led to accusations that the Shiite-led government of Nouri al-Maliki has been heavy-handed in his treatment of political rivals.

“Maliki has taken a very serious and unfortunate step toward pushing a large percentage of the Sunni population to feel disenfranchised,” said James Jeffrey, a former U.S. ambassador to Iraq now at the Washington Institute for Near East Policy.

Last week, government forces arrested a prominent Sunni, triggering a firefight that killed the lawmaker’s brother and some of his bodyguards. Security forces then dismantled a Sunni protest camp in Ramadi.

Responding to Sunni concerns, the central government agreed to withdraw its forces from Anbar cities this week. But once the forces left, al-Qaeda militants surfaced in Ramadi and Fallujah, influential Sunni cities west of Baghdad.

The violence erupted just as a number of tribal leaders in recent weeks have been trying to work out a political compromise with Maliki’s government, said Sterling Jensen, an analyst at the National Defense University’s Near East South Asia Center for Strategic Studies.

“They were about to get a negotiated settlement,” Jensen said. “For some reason, Maliki chose this time to go against the protesters.”

Ramadi and Fallujah are the major cities in Anbar, a Sunni region that has played an influential role in shaping Iraq’s history.

After the U.S.-led invasion of Iraq in 2003, the region became a hotbed of the Sunni insurgency that fought American forces. In 2004, Fallujah had become a symbol of resistance to the U.S. presence until an American-led offensive drove militants from the city in bloody street fighting.

In 2006 and 2007, a network of tribal leaders in Ramadi who were backed by American forces led an effective revolt against al-Qaeda, helping to turn the tide of war in Iraq.

Today, tribal leaders in Anbar remain wary of al-Qaeda and have urged local police to fight the militants, analysts say.

However, they point out that it was the presence of Americans who gave tribal leaders the confidence to turn on al-Qaeda in 2006 and 2007. Sunni tribal leaders saw Americans as an ally that could protect them from al-Qaeda and the excesses of a Shiite-dominated government.

Analysts fear that Sunnis now may be driven into the arms of al-Qaeda if they feel it is the only bulwark against a government hostile to their interests.

“It’s possible they are now opening their communities to an al-Qaeda they didn’t like,” said Stephen Biddle, a national security analyst and professor at George Washington University.

Al-Qaeda has also been strengthened by the civil war in neighboring Syria. The war there has attracted foreigners who came to fight under the al-Qaeda banner. Some of those fighters may be spilling into western Iraq, analysts say.

The fighting in Syria has given al-Qaeda in Syria “a new lease on life,” Jeffrey said.

“There are no peacekeepers here to stabilize this,” Biddle said. “As a result, you get a very dangerous tinderbox.”