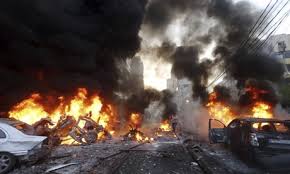 The casualty toll from the bombing has risen to six dead and 75 injured, according to the most recent reports.

Al-Arabiya quoting security sources as saying: “The bomb that exploded in Haret Hreik has been estimated to weigh 30 kg ( 66 lb.) of TNT.

President Michel Suleiman was quoted as saying in condemning the blast: “The terrorist hand that struck Dahiyeh is the same hand that is sowing crime, killing and destruction in all Lebanese regions.”

He called for intensifying the investigations to identify those who plotted and carried out the Haret Hreik bombing and bring them to justice.

Caretaker Prime Minister Najib Mikati was quoted as saying in a statement his condemning the blast:

“Targeting the southern Dahiyeh area of Beirut again, just days after the terrorist bombing that killed former minister Mohammad Chatah and others with him, proves once again that the hand of terrorism does not divide the Lebanese.”

“[Terrorists] do not wish stability for this country, but are planning and implementing a dirty conspiracy to drown the Lebanese in a sedition,” he added.

“We urge everyone to exercise restraint , more than ever, and overcome the political scheming.” He added.

” The repercussions of what is happening in Syria and Iraq are affecting us all as Lebanese and this is why we asked for an immediate withdrawal from Syria. But today, I only say that we stand beside the families of the victims and the wounded and we repeat our condemnation. We must stand united today.” He added: “Each person that was martyred today in Beirut’s southern suburbs is a martyr mourned by all the Lebanese.”

Former PM Saad Hariri said in comments about the bombing: “The terrorism that is targeting civilians, innocents and civilian areas is a criminal behavior that is devoid of any human feelings and can certainly be described as “satanic deeds.”

Former Lebanese president and Phalange Party leader Amin Gemayel said in comments about the bombing told LBCI: “The only way to respond to these acts is through reaching an understanding among each other.”

Violence has surged in Lebanon since Hezbollah militants acknowledged joining Assad’s side in the Syrian civil war. Attackers have targeted Hezbollah strongholds in Beirut and the Bekaa Valley and the Iranian embassy, while twin explosions also ripped through Sunni Muslim mosques in the northern city of Tripoli.