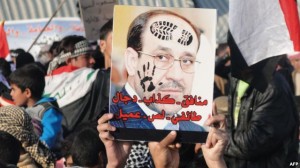 Deadly clashes have broken out between security forces and protesters in the central Iraqi city of Ramadi.

At least 10 people are reported dead in the fighting as police dismantled a Sunni Muslim protest camp.

The move on the protesters comes two days after the arrest of Sunni parliament deputy Ahmad al-Awani at his home in Ramadi, during which his brother and five guards were killed.

Prime Minister Nuri al-Maliki and his Shi’ite-led government had vowed to close the Ramadi camp — which was set up one year ago — saying it had become a headquarters for Al-Qaeda.

Tensions in the area rose after 15 soldiers were killed in a December 21 operation against Al-Qaeda in Anbar Province, where Ramadi is located.
RFERL

Photo: Ramadi has been a focal point of Sunni protests against Prime Minister Nuri al-Maliki’s Shi’ite-led government. The poster accuses Maliki of being a liar, a thief , a sectarian and a foreign agent