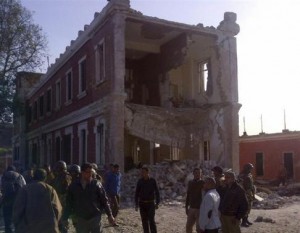 An explosion hit a military intelligence building northeast of Cairo on Sunday, the second blast in less than a week to strike an Egyptian security installation. Four people were injured, the military’s chief spokesman said.

State television showed pictures of the damaged two-story building in the small town of Anshas , with a brick wall blown out on both the ground and upper floors. The cause was thought to have been a car bomb, state media reports said.

Although Sunday’s attack was much less serious than a deadly one Tuesday at a police headquarters in Mansoura, in northern Egypt, it revived concerns that an Islamist campaign against security forces is expanding from the Sinai peninsula to mainland Egypt.

A militant group called Ansar Bayt al-Maqdis, or Partisans of Jerusalem, claimed responsibility for the Mansoura bombing, which killed 16 people. But the government instead cast blame on the Muslim Brotherhood, the country’s largest and oldest Islamist movement, and the next day branded the Brotherhood a terrorist organization.

That move is having far-reaching effects, shutting down charities with even indirect links to the Brotherhood and exposing those who express support for deposed president Mohamad Morsi to severe penalties. Morsi himself is jailed and faces three separate trials on a number of charges, some of which carry the death penalty.

Chaotic clashes broke out for a third straight day Sunday at Cairo’s Al Azhar University, the main seat of Sunni learning, where police fired tear gas to break up rallies by pro-Morsi students trying to disrupt the university’s exam schedule. A student was killed and an administration building was set ablaze in a similar confrontation on Saturday.

Egyptian authorities and pro-Morsi activists accused one another of provoking the violence. Human rights groups say more than 1,300 people have died in protests since Morsi, Egypt’s first democratically elected president, was ousted in a popularly supported coup nearly six months ago.

The military-backed interim government that succeeded him has promised to restore democracy, but the harshly authoritarian measures used to suppress dissent have spawned doubts about that pledge.

Photo:People and army personnel stand around a damaged bulding after an explosion in Egypt’s Nile Delta town of Anshas, about 100 km (65 miles) northeast of Cairo, December 29, 2013. REUTERS/Stringer