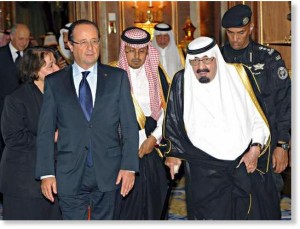 “We support the Syrian coalition, and we know what was done by Saudi Arabia to fight the extremists there,” Hollande said during a press conference in the Saudi capital.

The president stated that the “only way out” importance of ending the Syrian conflict through a “transitional phase.”

Hollande also urged the resolution of the Syrian crisis because of its repercussions on Lebanon and the region.

The president also stated his support for the transitional political roadmap in Egypt.

Speaking on the Iranian nuclear deal reached last month with six world powers – including France – Hollande said that France will only lift sanctions imposed on the Islamic Republic when Tehran confirms its commitment to the agreement.

Earlier on Sunday, Saudi Arabia’s King Abdullah bin Abdul Aziz said in a meeting with Hollande that Syrian President Bashar al-Assad has “destroyed his country” by letting “Islamist extremists” into the conflict-striken nation, a French official familiar with the discussions told Agence France-Presse.

Saudi Arabia is one of the strongest backers of Syria’s moderate opposition groups.

Both France and Saudi said they will continue to back rebels fighting to overthrow Assad, in contrast with the cautious Obama administration, according to AFP.

King Abdullah also expressed the “convergence” of positions between the two countries on regional issues, while praising what he called France’s “courageous” position on these crises.

Also on Sunday, Hollande told UK-based pan-Arab al-Hayat newspaper that Saudi Arabia is among France’s “top partners.”
This is Hollande’s second visit to the Saudi capital since he took office in May last year.