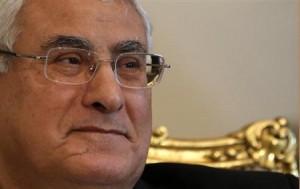 Egypt’s interim president said Sunday that a presidential election could be held before voting for parliamentary seats, raising the possibility that the military-backed government was preparing to deviate from the transitional plan it unveiled after the ouster of President Mohamed Morsi in July.

The plan had called for parliamentary elections to be held first, after a constitutional referendum. The military-backed government has repeatedly emphasized its commitment to the transitional plan, offering it as evidence of its commitment to democracy.

Analysts have said that switching the order of elections could allow Egypt’s leaders to maintain tighter control over their outcome, by allowing the newly elected president to influence the makeup of Parliament, possibly by forming a political party. One of the most frequently mentioned candidates for president is Egypt’s defense minister, Gen. Abdul-Fattah el-Sisi, though he has not said whether he will run.

The interim president, Adly Mansour, said Sunday that holding the presidential vote first would be legal, state media reported. Both the presidential and parliamentary elections would be held within six months of the ratification of a draft constitution. A referendum on the charter will be held in January.

In the past week, the government has moved forcefully to eliminate its principal foe, the Muslim Brotherhood, which had been Egypt’s most successful political party in elections after the fall of Hosni Mubarak in 2011. On Wednesday, the government designated the Brotherhood as a terrorist group, outlawing its activities and even membership in the organization. Days of unrest have followed the decision, including protests by Brotherhood supporters on the campus of Al-Azhar University in Cairo.

The government announced its decision after blaming the Brotherhood for a bombing that killed 16 people, even though another, unrelated group claimed responsibility.

Michael Wahid Hanna, a fellow at the Century Foundation in New York, said the government “seized on the moment and the grotesque nature of the attack” to accomplish several goals. While hard-liners in the security services aim to eradicate the Brotherhood, the terrorist designation gives other officials a “rhetorical” tool to stir interest in the coming elections, Mr. Hanna said. It also provides them with a firmer legal basis to detain protesters and further suppress dissent ahead of the vote, he said.

As the government tries to consolidate its power, it has faced an unexpectedly sharp challenge from militant groups that have been able to strike security targets at will. On Sunday, a car bomb exploded outside a military intelligence building north of Cairo, wounding at least five people and causing part of the building to collapse.

It was the third bombing in less than a week, suggesting a quickening pace but also a growing sophistication in the militant attacks. Interior Ministry officials said the bomb appeared to have been detonated by a timer, or by remote control.