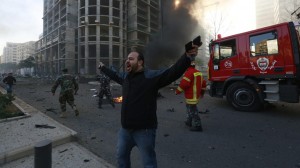 In a statement, the top American diplomat said the “assassination” of Chatah — an influential member of a coalition opposed to Syria’s ruling regime — represented a “terrible loss for Lebanon, the Lebanese people and for the United States.”

Kerry forged a relationship with Chatah during several visits to Beirut during his long tenure as a U.S. senator, AFP reported.
“I know he was a voice of reason, responsibility and moderation,” Kerry said in a statement.

“His presence will be missed, but his vision for a united Lebanon, free from sectarian violence and destabilizing interference, will continue to guide our efforts,” he added.

Kerry said the United States government would back Lebanon as it sought to hunt down “those responsible for this heinous and cowardly attack.”

Kerry’s statement made no reference to the conflict raging across Lebanon’s border in Syria, nor to Hezbollah’s support of the Syrian regime, stating only that Washington wanted to see Lebanon maintain “its sovereignty and stability.”

“The secretary general is deeply troubled by the recurring acts of terrorism in Lebanon which pose a severe threat to the country’s stability and national cohesion,” said Nesirky.

Ban praised efforts by Lebanese authorities and security forces to “protect the country from the impact of the crisis in neighboring Syria” and urged restraint by all sides, added the spokesman.

The U.N. leader “reiterates the determination of the international community to support Lebanon’s security and stability,” during the mounting Syria crisis which increasingly threatens neighboring countries.

Ban hailed Chatah as “a tireless voice for tolerance, diversity, and moderation” and called his death “a tremendous loss for Lebanon,” said the spokesman.

“The kingdom strongly condemns this cowardly criminal act and urges all parties in Lebanon to listen to the sound of rationalism and common sense… and insists on the need of the state to enhance its authority and that of the army across all Lebanese territories.”

The Saudi embassy in Beirut also warned its citizens not to travel to Lebanon and urged those there to leave, the official SPA news agency reported.

Qatar’s foreign ministry in a statement said it “strongly condemns such criminal acts that contradict all human values, and threaten to drag the region into chaos and instability.”

Doha “affirms its stance in rejecting all forms of violence regardless of the source or motivation,” it added.

Kuwait also made a similar statement and urged “self-restraint and unity” in Lebanon.

Regional powerhouse Saudi Arabia backs Hariri’s camp in Lebanon and has supported, along with Qatar, Syrian rebels against Assad’s regime.

Secretary-General of the Arab League Nabil Al Araby condemned “the terrorist” blast and called on upon all Lebanese political leaders to be vigilant and exercise maximum self-restraint.

Chatah, an economist and also a former ambassador to the United States, was the ninth high-profile anti-Syria figure killed in Lebanon since the 2005 assassination of former premier Rafiq Hariri.

Photo: A security man shouts as smoke rises from the site of an explosion in Beirut’s downtown area December 27, 2013. Former Lebanese minister Mohamad Chatah, who opposed Syrian President Bashar al-Assad, was killed in an explosion that targeted his convoy in Beirut on Friday along with at least six other people, security sources said.REUTERS/Jamal Saidi