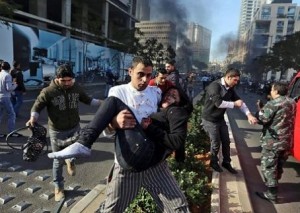 The Syrian regime rejected accusations by Lebanon’s March 14 coalition that it was behind the Beirut car bomb blast that on Friday killed six people, including former minister Mohammad Chatah.

“These wrong and arbitrary accusations are made in a context of political hatred,” said Syria’s Information Minister Omran al-Zohbi, in remarks published by state news agency SANA.

Dr. Chatah, a former Lebanese finance minister and ambassador to the United States, died Friday when a car bomb struck his convoy in downtown Beirut as he was heading to a March 14 meeting at Future Movement Saad Hariri’s residence in Downtown Beirut .

Photo: A Lebanese man carries an injured woman at the scene of an explosion in Beirut, Lebanon, Friday, Dec. 27, 2013. A strong explosion has shaken the Lebanese capital, sending black smoke billowing from the center of Beirut. The blast went off a few hundred meters (yards) from the government headquarters and parliament building. (AP Photo/Bilal Hussein)