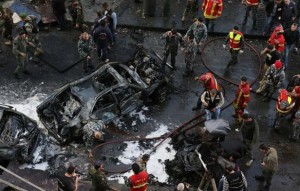 The “cowardly” assassination of former Finance Minister Mohammed Chatah in a car bombing in Beirut drew worldwide condemnation Friday as Lebanese officials and politicians mourned the loss of a “moderate” voice.

“My thoughts and sympathy with the people of Lebanon and the families of all those killed,” he said.
U.S. Embassy condemned Chatah’s assassination: “He had a long history of promoting Lebanon’s stability and democratic principles in both Lebanon and abroad, ” the embassy said in a sttaement

“Chatah was a wise, tolerant, smart patriot,” he said.

“His courage not that he knew risks but that he believed Lebanon worth taking them for,” he said.

Fletcher said Chatah was “determined to honor his memory by support to justice, rule of law and stability for Lebanon.”

“Thoughts also with families of all those who lost loved ones, and with emergency services as they respond to this heinous act of terror,” Fletcher tweeted.

French Ambassador Paoli described Chatah as a “moderate” man and “the symbol of tolerance.”

The diplomat , who called for unity said Lebanon was in danger.

Talking to IRNA news agency, Hossein Amir-Abdollahiyan said: “The enemies of Lebanon are taking aim at all sides.”

He added: “Perpetrators of such moves are seeking to create new strife in the country.”

He expressed confidence that Lebanese officials and political factions will “foil all the evil attempts through vigilance.”

In its condemnation statement, the Arab League urged all Lebanese parties to exercise self-restraint.

“The assassins do not care about forming a new government or about the people’s concerns. The criminals have nothing to do with life and we are grateful that the March 14 camp is still alive.”

“He was killed for having faith in Lebanon first and the principles of the Cedar Revolution”, he said.

Lebanese Forces leader Samir Geagea also condemned the assassination, saying that it is part of the series of assassinations against March 14 figures.

“Our battle with the murderers is open and the Cedar Revolution will continue until we achieve the rise of the Lebanese state and until threats cease,” he remarked.

“They have gone too far with Chatah’s assassination and we cannot deal with this crime as an isolated incident, especially since it was executed by highly professional hands,” he added.

“Does the battle against Takfiris entail Chatah’s assassination?” he wondered in an indirect reference to Hezbollah’s fighting in Syria against alleged Takfiri groups.

“Chatah was a symbol of moderation and dialogue and we wonder just how frustrated the owners of illegitimate arms have become in that they sought to assassinate such a figure,” noted Geagea.

“The assassination of Dr. Chatah is a negative message to all the moderates and should be received with [restraint],” Jumblatt said in a statement on Friday.

“It is a very negative message to all those who [act] wisely and should be faced with more [acts] of wisdom.”

“To the criminal we say that they will not benefit from killing people and they will be tried by the STL.” A possible reference to the trial of five Hezbollah members who are accused of being behind former PM Rafik Hariri’s assassination.

“Chatah’s murderer is the same one who is targeting the Syrian people, Tripoli, and the heroes of Lebanon since 2004 and until this day.”
“Chatah was killed at the hands of the murderer whom you all know. This same criminal threatens us on a daily basis. The criminal will not be victorious.”

“We say to the criminals that a free Lebanon will remain and it will not be defeated by tyrants.” he added.

“Lebanon will not die. It will not surrender and it will remain even after our death more powerful than the criminals.” He said, adding that Chatah’s murder should be referred to STL.

Maronite Patriarch Cardinal Beshara Boutros al-Rai described the assassination of the former Finance Minister as a loss for Lebanon.

“In the assassination of the former minister Lebanon has lost a shining face of moderation, intellect, and the love of [one’s] country,” Rai said in a statement on Friday.

Even politicians allied with the Syrian regime rushed to condemn Chatah’s assassination, despite the fact that fingers were pointed at Syria as being behind the murder

“All sides are required to act responsibly and avoid subjecting Lebanon to the evil of internal strife,” he added in statement, while offering his condolences to the victims’ families.

“We hope that the blood of martyrs would bring the Lebanese closer,” he told LBCI, hoping for dialogue between the rival sides.

Similarly Caretaker Justice Minister Shakib Qortbawi who represents FPM in the caretaker cabinet described the bombing as “barbarous,” saying “it had nothing to do with any sect or cause.”

Caretaker Health Minister Ali Hassan Khalil who represents Speaker Nabih Berri in the caretaker cabinet , a close ally of the Syrian regime called for “wisdom in resolving problems … and reaching an agreement on how to confront the upcoming stage.”

“We condemn this terrorist attack that targeted our brother Mohammed Chatah,” he added.

“The country is exposed and as long as we are divided we’re helping others to target us.”

“This terrorist act reflects the political bankruptcy of the criminals and strips them from all ethical and humanitarian values.” Eid said

Chatah, a former ambassador to the United States, died Friday when a car bomb struck his convoy in downtown Beirut as he was heading to a March 14 meeting at Future Movement Saad Hariri’s residence in Downtown Beirut .

No one has claimed responsibility for the attack, but Chatah was a close advisor of Future Movement leader MP Saad Hariri and an outspoken critic of the Syrian regime and of Hezbollah.

Photo: A general view from above shows Lebanese security forces and firefighters at the scene of a huge car bomb explosion that rocked central Beirut on December 27, 2013.  AFP