Jumblatt: Chatah’s murder is a message against moderation" 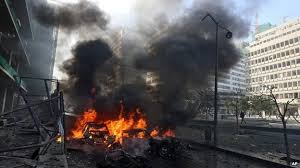 “The assassination of Dr. Chatah is a negative message to all the moderates and should be received with [restraint],” Jumblatt said in a statement on Friday.

“It is a very negative message to all those who [act] wisely and should be faced with more [acts] of wisdom.”

The PSP leader also said that the assassination was an act of terrorism that killed “a distinguished personality and statesman” who “adopted the language of dialogue, rationality and moderation.”

Chatah, a former Lebanese finance minister and ambassador to the United States, died Friday when a car bomb struck his convoy in downtown Beirut as he was heading to a March 14 meeting at Future Movement Saad Hariri’s residence in Downtown Beirut .

No one has claimed responsibility for the attack, but Chatah was a close advisor of Future Movement leader MP Saad Hariri and an outspoken critic of the Syrian regime and of Hezbollah.