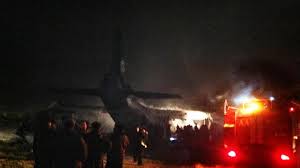 A Russian cargo plane has crashed in Siberia, killing nine people according to local reports.

The Antonov An-12 turboprop aircraft was on its way from Novosibirsk to Irkutsk when it fell on warehouses at a military unit outside the town.

It started a fire but no casualties were immediately reported on the ground.

Those who died were the aircraft’s six crew and three others on board.

The Soviet-era plane is understood to have first seen service in 1963.

A security source was quoted as saying potential causes were technical malfunction and pilot error.

Russia’s air safety record is among the world’s worst.

In November, dozens of people died when a passenger plane crashed at an airport in Kazan.