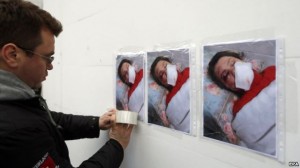 Kiev — Several hundred Ukrainians have gathered outside the Interior Ministry in Kiev to demand the resignation of Interior Minister Vitaly Zakharchenko after an opposition journalist known for her investigations into government corruption was attacked.

Tetyana Chornovil, 34, was dragged out of her car and savagely beaten near Kiev early on December 25, just hours after an article she wrote on the assets of top government officials was published.

Chornovil, who writes for the “Ukrainska Pravda” opposition website, is a prominent activist who has given speeches at recent antigovernment protests.

Protesters condemned the attack and vowed not to leave Independence Square, where weeks-long antigovernment demonstrations continue.

“This [attack on Tetyana Chornovil] was very brutal. It was a brutal action by the people who did that. I watched on television yesterday how this all happened. It is not hooliganism, it is an attempted murder,” one protester, Oleksiy, said.

The Interior Ministry says police believe three people were involved in the assault, two of whom have already been arrested.

Pro-EU demonstrators have been occupying central Kiev but their numbers began falling after Russia offered Ukraine a $15 billion bailout this month.

However, the attack against Chornovil appears to have given a new impetus to protesters. One of them, Mykola vowed to continue the demonstrations into next year: “We came here to stay until the very end and we are not planning to leave. We will be celebrating the New Year here on the square.”

On December 26, ratings agency Standard & Poor’s (S&P) raised its outlook for Ukraine to stable from negative.

S&P said the cash injection of $15 billion — about 8 percent of Ukraine’s predicted 2014 gross domestic product — “should cover the government’s external financing needs over the next 12 months.”

S&P added that “based on our expectations of Russia’s support” it no longer expected a devaluation of the Ukrainian hryvnia.

But the agency also warned that the Russian support appeared subject to good diplomatic relations between the two ex-Soviet states being maintained.

Photo: A protester hangs up pictures of journalist Tetyana Chornovil on a wall in front of the Interior Ministry building in Kiev.