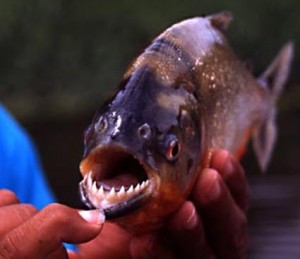 A school of carnivorous fish related to the piranha has attacked bathers in an Argentine river, injuring about 70.

Thousands of bathers were cooling off in the Parana River in Rosario, 300km (186 miles) north of Buenos Aires, on Christmas Day when the attack happened.

Officials blamed the attack on the palometa fish, describing the event as “exceptional”.

Paramedics said dozens of people had their extremities attacked and some had lost digits.

Director of lifeguards in Rosario, Federico Cornier, said bathers suddenly began to complain of bite marks on hands and feet as they cooled off in a heat wave.

He said the palometa was “a type of piranha, big, voracious and with sharp teeth that can really bite”.

Mr Cornier said: “This is not normal. It’s normal for there to be an isolated bite or injury, but the magnitude in this case was great… this is an exceptional event.”