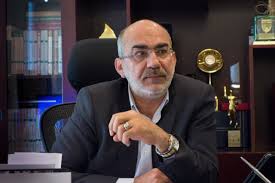 Al-Manar’s Managing Director Abdallah Kassir resigned from his post Wednesday as the head of the Hezbollah television station.

The former Hezbollah MP’s resignation was accepted by the station and he is now reportedly out of the country, according to a report by NOW.

Kassir’s resignation comes two weeks after Hezbollah’s Al-Manar Television and Al-Nour Radio officially apologized to the Bahraini Information Affairs Authority (IAA) for the way they have been covering Bahraini news.

The media outlets made their public apology on December 8 at the 90th meeting of the Arab States Broadcasting Union (ASBU) General Assembly executive board in the presence of member states.

According to some reports Kassir may have been fired, because Hezbollah leadership was upset about the apology. Hezbollah in fact denied any responsibility for its Lebanese Communication Group (Al-Manar Channel and Al-Nour Radio) apology to the Bahraini Information Affairs Authority (IAA) for its past coverage of news relating to Bahrain.

Hezbollah claimed that its leadership was never consulted on the matter and the apology was an initiative taken by the Hezbollah media delegation without referring to the party leadership.

“The apology was the delegation’s personal assessment and the leadership of the party was not consulted,” the Hezbollah statement said.

The party issued the following statement about the issue:

1- The position taken by the delegation representing the Lebanese Communication Group was a special initiative that has not been reviewed by the Hezbollah leadership .

2- Our support for the the oppressed people of Bahrain did not change at all . We consider that the injustices practiced by the Bahraini authorities against the people are huge and they still persist in denying the rights of political participation for the Bahraini people .

3 – The apology should go to the Bahraini people themselves, who showed patience and tolerance for more than two and a half years and have suffered from repression and all kinds of of abuse by the ruling authorities .

4-The threat and intimidation and unjust accusation practiced by the authorities in Bahrain against anyone who supports the Bahraini people and their just cause is further evidence of the inability of the ruling authorities to dialogue with its own people. “

The apology was published and announced at the 90th meeting of the Arab States Broadcasting Union (ASBU) General Assembly executive board in the presence of member states. In its statement, The Lebanese Communication Group pledged to commit, in the future, to objectivity in covering Arab news and events and abide by professional standards.