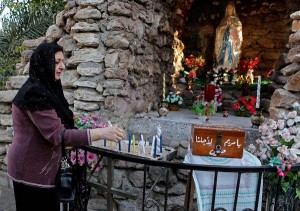 Two bombs in Christian areas of the Iraqi capital Baghdad have killed at least 35 people, officials have said.

One device exploded near a Catholic church when worshippers were leaving a Christmas Day service, killing 24. Another bomb ripped through a market, killing 11 more people.

Christian leaders denied that the attacks had targeted worshippers.

Iraq’s ancient Christian community has more than halved in recent years, from an estimated population of 900,000.

Both blasts happened in the Dora area of Baghdad.

The bomb outside St John’s Catholic church exploded in a parked car, shortly after a blast at an outdoor market in the mainly Christian al-Athorien district.

No-one has yet admitted carrying out the attacks, which came as Christmas Day services were held across Iraq.

During a service at St Joseph Chaldean church in the Karrada area of the capital, Father Saad Seroub called for peace and security for all Iraqis.

‘Feeding terrorism’
Churches have been targeted across the country since the fall of Saddam Hussein in 2003.

An attack by gunmen in 2010 on the Catholic Cathedral in Baghdad left more than 50 people dead.

A surge in sectarian violence this year has claimed the lives of more than 7,000 civilians in Iraq, the highest annual number of fatalities since 2008.

Most of the attacks have targeted Shia civilians and the smaller Sunni population.

The bloodshed escalated in April, after the army raided a Sunni anti-government protest camp.

The conflict in Syria has also prompted a spike in attacks, many involving al-Qaeda in Iraq.

Prime Minister Nouri al-Maliki told the BBC on Sunday that the Syrian crisis was “feeding terrorism in the region”.