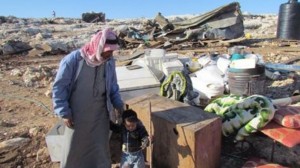 The UN Relief and Works Agency (UNRWA) for Palestinian refugees has condemned Israel’s demolition of Palestinian Bedouin dwellings in the West Bank, calling for an immediate halt.

“UNRWA condemns the latest demolitions in the West Bank, which displaced 68 people, the most recent of which occurred on Christmas Eve,” spokesman Chris Gunness said in a statement.

“In addition, some 750 head of sheep and goats are without shelter at this crucial lambing season,” he said.

Gunness stated that at least 663 Palestinian buildings – including 259 homes – have been demolished, and 1,103 Palestinians have been displaced in the West Bank and East Jerusalem this year.

Israel maintains that it only dismantles buildings that were put up without permission. But Palestinians say they are almost never granted permits.

The UN has continuously spoken out against demolitions in the West Bank. Earlier in December, the United Nations decried Israel’s decision to destroy over two dozen Palestinian properties in the West Bank, issuing a statement accusing Israel of pushing the same Palestinian families out of their homes in less than two weeks.

Moreover, dozens of NGOs have asked Israel not to continue the demolitions. Palestinian leaders maintain that resettlement efforts must cease if there is ever to be any chance of peace with Israel.

Photo: Father and child amongst their belongings following the demolition. Image from UNRWA