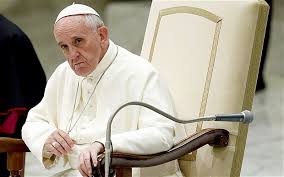 Christians regard Jesus as the Prince of Peace, and popes generally use their Christmas day Urbi et Orbi address, “to the city and the world,” to express hopes for peace in various global hot spots.

Pope Francis continued that tradition today, beginning with the conflict in Syria and then going on to mention the Central African Republic, South Sudan, Nigeria, the Israeli/Palestinian conflict, and the Democratic Republic of Congo.

Syria has been a special preoccupation for Pope Francis in 2013, culminating in a worldwide day of prayer and fasting for peace he called on Sept. 7 in an effort to head off calls for Western military strikes in the country.

Aside from the humanitarian imperative of trying to end a bloody civil war which, according to recent estimates, has claimed more than 120,000 lives, Francis is also concerned about the fate of Syria’s Christian minority.

Christians represent roughly ten percent of the national population, and have become frequent targets for Islamic militants within the uprising against President Bashar al-Assad. Scores have been kidnapped amid the chaos of the war, including two Orthodox bishops, an Italian Jesuit missionary, and a group of Lebanese nuns.

This morning, Francis also expressed special compassion for immigrants, specifically expressing the vow that “tragedies like those we have witnessed this year, with so many deaths at Lampedusa, never occur again!”

Francis made his first trip as pope outside Rome on July 8 to Lampedusa, an island in the southern Mediterranean that serves as a major point of arrival for impoverished migrants and refugees from Africa and the Middle East.

An estimated 20,000 people have died over the last two decades making the perilous crossing, including hundreds who perished earlier this year when a boatload of Eritrean refugees capsized and caught fire.

Lampedusa has been in the center of political controversy in Italy anew in recent days after a national television network aired images of immigrants being subjected to degrading treatment at an Italian detention center.

The pontiff prefaced his remarks with reflections on the real nature of peace.

“True peace is not a balance of opposing forces,” Francis said. “It is not a lovely ‘façade’ which conceals conflicts and divisions.”

Instead, he said, peace “calls for daily commitment, starting from God’s gift, from the grace which he has given us in Jesus Christ.”
At the beginning of his remarks, Francis said he wanted to join the song of the angels who appeared to the shepherds to announce the birth of the Christ child.

“It is a song for every man or woman who keeps watch through the night, who hopes for a better world, who cares for others while humbly seeking to do his or her duty,” the pope said.

At the end, Francis returned to a now-familiar theme, the tenderness of God.

“Let us allow ourselves to be warmed by the tenderness of God,” he said. “We need his caress.”

Prior to the pope’s address, French Cardinal Jean-Louis Tauran announced a plenary indulgence as part of the pope’s Christmas blessing. As the Cardinal Proto-deacon, it was Tauran who announced Francis’ election to the papacy from the balcony overlooking St. Peter’s Square nine months ago.

Prior to the Urbe et Orbi, an Italian military band paraded down the via della Conciliazione, the broad street leading up to St. Peter’s Square, and played both the Italian and the Vatican national anthems for the pope.