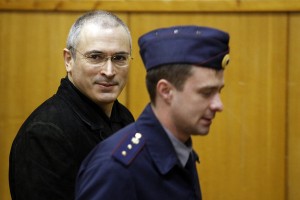 The tycoon who symbolized opposition to President Vladimir Putin was freed Friday after a decade in custody and was spirited out of Russia in an operation that reminded some of the release of Soviet-era dissidents and seemed likely to mark the end of his political activity.

A day after Putin unexpectedly announced that he would probably free Mikhail Khodorkovsky, the former co-owner of the Yukos oil company was put on a helicopter at his labor camp near the Finnish border and flown to St. Petersburg, then to Berlin in a private jet.

The operation, which removes an unwanted distraction as Russia prepares to host the Winter Olympics in February, was carried out so swiftly and silently that by the time Khodorkovsky’s lawyers arrived at the camp he was already gone. His mother, who is receiving cancer treatment in Germany, had not been told of his impending arrival there. She was in Moscow.

Khodorkovsky said in a statement that he had written to Putin on Nov. 12 asking for a pardon.

“The issue of admission of guilt was not raised,” he said, thanking those who supported him and co-defendants he said were “unjustly convicted and continue to be persecuted.”

“I am constantly thinking of those who continue to remain imprisoned,” he said.

Human rights activists said they were pleased that Khodorkovsky had been released, but the manner in which it happened left them deflated.

“I already imagined crowds of people coming out to meet Misha in Moscow and was trying to think what assembly hall was big enough for his first news conference,” said Svetlana Gannushkina, a board member of Memorial, an influential Russian human rights group. “I was already imagining how all opposition forces would rally around this living symbol of courageous and selfless resistance to the regime. But my romantic expectations were short-lived.”

Gannushkina and another leading activist, Lev Ponomaryov of the For Human Rights movement, compared it with the release of a pair of Soviet-era dissidents in 1986 that was among the first signs of reform under Mikhail S. Gorbachev.

Ponomaryov said he was happy about Khodorkovsky’s release, “but I don’t see any other signs of change with Putin in the Kremlin instead of Gorbachev.”

Khodorkovsky was convicted of tax evasion, fraud and money laundering, in trials that human rights activists said were politically motivated. His sentence was set to expire in less than a year, but prosecutors had said they were preparing a new case against him, alleging that he had given instructions from prison for associates to use his money to change legislation in his favor.

Putin indicated Thursday that a new case was unlikely to reach court. His decree pardoning Khodorkovsky was published on the Kremlin’s website Friday morning.

When a team of lawyers arrived in the early afternoon at the prison gates at the Segezha labor camp with a copy of the decree in their hands, they were told their client was gone.

“Our lawyers wouldn’t take it for granted and waited to see the official document of his release,” Khodorkovsky’s senior lawyer, Vadim Klyuvgant, told The Times. “They were not even told where he was heading.”

They found out later that he was on his way to St. Petersburg, and then to Berlin.

“Upon his release Mikhail Khodorkovsky asked that documents be arranged for him to travel abroad,” Kristina Belousova, a prison system spokeswoman, told Rossiya-24 television network. “After his liberation he flew off to Germany, where his mother is receiving treatment.”

However, his mother was in Moscow, initially unaware of his travel plans.

A few hours after the news of his release broke, she said she still hadn’t heard from him.

“I heard that he was released today but he has never got in touch with me,” she said in a telephone interview. “I suspect he … is unable to call me or else he would have done it long ago.”

Khodorkovsky did call his mother once he reached Berlin, and she later said she would join him there shortly.

Among those still imprisoned is former Yukos co-owner Platon Lebedev, whose prison term expires in April, and Alexei Pichugin, former Yukos security chief, who is serving a life sentence after being convicted of organizing three contract killings. Human rights activists charge that Pichugin was framed in an attempt to force him to testify against Khodorkovsky, which he refused to do.

Ponomaryov said the way Khodorkovsky was released reminded him of the case of Yuri Orlov, a nuclear scientist and founder of the Moscow Helsinki Group, a rights watchdog.

Orlov was flown from exile in northern Siberia to the United States. “When the plane landed in Moscow, Orlov stayed on board to wait for his wife to join him,” Ponomaryov said.

Gannushkina recalled the release of Natan Sharansky, a future member of the Israeli Cabinet, who was imprisoned on treason charges but freed and sent to Berlin in a prisoner exchange.

“I see the old KGB handprints in every moment of today’s operation,” Gannushkina said.

Khodorkovsky was released before the Olympic Games because Putin no longer sees him as an enemy, political analyst Stanislav Belkovsky said.

“Khodorkovsky will not become the leader of the joint opposition movement, as he will spend most of next year taking care of his sick mother and recuperating himself,” said Belkovsky, president of the National Strategy Institute, a Moscow-based think tank.

He said he had reason to believe that Khodorkovsky had promised to stay out of politics and forgo trying to reclaim billions of dollars’ worth of lost property.

But Andrei Piontkovsky of the Moscow-based System Analysis Institute said he thought the freed tycoon would try to win the release of Lebedev and Pichugin.

Photo: Mikhail Khodorkovsky looks at his wife, Inna, as he is led into a courtroom in Khamovnichesky court in downtown Moscow in October 2010 shortly before his second conviction. Photo by Sergei L. Loiko Los Angeles Times