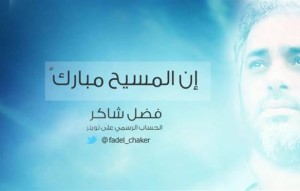 Just a week before Christmas, a former Lebanese pop star and heartthrob turned Islamist fugitive has released a song about Jesus.

Once adored by women across the Arab world for his warm voice and good looks, Fadel Shaker gave up pop music in 2011, when he became a follower of a radical Sunni Muslim cleric, Sheikh Ahmad al-Assir.

He grew his beard and publicly renounced pop music as haram, or forbidden, in Islam.

The duo have been on the run from since the summer, when 18 soldiers died in clashes with Assir’s supporters.

The song, entitled ” Christ is Blessed ,” has already received more than 50,000 hits.

“Christ is blessed and we are all his beloved. He is the bringer of the true faith,” Shaker sings softly, in a style akin to traditional Islamic chant. 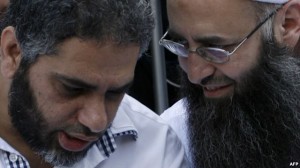 Accompanied by a chorus that repeats the refrain throughout the four-and-a-half minute clip, he tells of the conception by Jesus’ mother Mary.

“She gave birth to him, she was pregnant from the Creator of the universe, without the sperm of a man.”

Unlike Christians, Muslims do not believe Jesus is the son of God. However, they do believe in the virgin birth, after a miraculous conception.

Jesus is highly revered in Islam as a prophet, and Mary is deeply hallowed, with a sura [collection of verses] in the Quran dedicated to her.

In the song, Shaker also makes reference to the belief that Jesus spoke in his cradle.

Accompanying the link to his latest track, Shaker tweeted: “One is not a true Muslim if one doesn’t believe in Christ, peace be upon him.”

The song was met with mixed reactions, ranging from harsh criticism to praise.

“Christ that you are singing for preached peace and Love not killing… Whether you are doped up, or you are trying to make a move back to normal society by using a great figure like Jesus. Which is a cheap shot. Go rot in hell,” said one YouTube user.

But another said: “God bless you. We are with you.”

Described by musicians in his former entourage as an extremely sensitive and gullible person, Shaker was one of the Arab world’s best loved pop stars in the 1990s and 2000s.

But after a revolt broke out in Syria in March 2011 against President Bashar al-Assad, Shaker joined Assir’s inner circle in Sidon, southern Lebanon.

He adopted not only Assir’s anti-Assad discourse but also his radically sectarian position in opposition both to Assad and the Shiite Muslim movement Hezbollah, which backs Damascus.

In his mid-forties, Shaker was born to a Palestinian mother and Lebanese father in the country’s biggest Palestinian refugee camp, Ain al-Helweh.