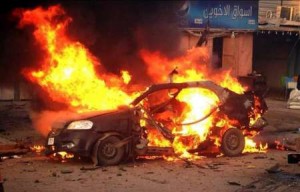 Suicide bombings targeting Shiite pilgrims around Iraq’s capital on their way to a holy city and other violence across the country killed 29 people Thursday, officials said.

One suicide bomber set off his explosive belt near a group of pilgrims in Baghdad’s southern district of Dora, killing 14 people and wounding 28, police said. Another blew himself up among pilgrims in Youssifiyah, 12 miles south of Baghdad, killing eight and wounding 28 shortly after sunset, officials said.

The pilgrims were heading to the holy Shiite city of Karbala, 55 miles to the south. Shiite pilgrims are commemorating Arbaeen, the end of 40 days of mourning following the anniversary of the death of the Prophet Muhammad’s grandson, Imam Hussein, a revered Shiite figure.

Hundreds of thousands of Shiite pilgrims make their way every year to Karbala for Arbaeen. Al Qaeda and Sunni Muslim insurgents frequently target the Shiites, whom they consider to be infidels. Iraqi security forces also often poorly protect Shiite marches to holy cities.

Meanwhile Thursday, gunmen wearing military uniforms broke into the home of a former member of anti-Al Qaeda Sunni militia in Baghdad’s western suburb of Abu Ghraib, killing him, his wife, his two children and his brother-in-law, a police officer said. The officer said the attack wounded two other children.

The Sunni militia, known as Sahwa, joined forces with U.S. forces during the height of Iraq’s sectarian conflict to fight Al Qaeda. Ever since it has been a target for Sunni insurgents who consider its members traitors.

Medical officials confirmed the casualty figures. All officials spoke on condition of anonymity because they were not authorized to talk to journalists.