$40 million jackpot Lottery winner gives it all to charity 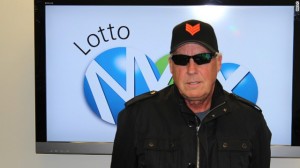 Tom Crist was enjoying a trip to California, having lunch at a golf course in Palm Springs, when the call that could change his life came.

It was officials with the lottery in western Canada, and they were telling him he had won $40 million.

But instead of making plans for a big spending spree, Crist immediately decided that every dollar — every single buck — was to go to charity to honor his late wife.

“I’ve been fortunate enough, through my career, 44 years with a company,” he told the CBC News. “I did very well for myself. I’ve done enough that I can look after myself, for my kids, so they can get looked after into the future. I don’t really need that money.”

OK, fair enough, but that’s a really big gesture even if you are already set.

Crist, who won the jackpot in May, told the CBC that his wife of 33 years, Jan, died almost two years ago of cancer. The lottery jackpot will be placed in trust and will be donated to charities he and his children pick.

Yes, he has children, and they are cool with dad giving all the money to good causes. They only asked why he waited seven months to tell them, he said.

He told them he wasn’t sure how to handle it. He wanted to remain anonymous but the rules mandate a picture and an announcement.

There’s a picture of him from the lottery folks wearing a ball cap and sunglasses.

The lottery proudly announced that Crist played two games by subscription. That is, he paid in advance, and they paid him when he won something. There was no ticket to check.

“I wasn’t even sure which game I’d won on, or what the numbers were,” Crist said, according to a news release from the lottery. “I’ve paid for the subscription when I get the renewal notice every year, and then I just file it. Sometimes I’d get a check for $10 or $20, but I never expected this.”

He said he didn’t even tell his golf partners that day in May that he had won.

Crist retired in September as the president and CEO of an electrical products and services wholesale company. The company was sold in late 2012. Reuters said the deal was for $1.14 billion.