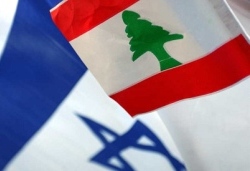 Israel and Lebanon on Monday rushed to ease tensions following a deadly border skirmish that left one Israeli soldier dead, with the enemy countries holding a face-to-face meeting with U.N. peacekeepers and pledging their commitment to a seven-year-old cease-fire.

The U.N. peacekeeping force along the volatile border, UNIFIL, said it called the meeting to “establish the facts and circumstances” behind the flare-up in violence and to restore a cease-fire that has been in place since a 2006 war. It said both sides pledged to preserve “calm and stability.”

In Sunday’s incident, a Lebanese sniper opened fire at an Israeli vehicle traveling near the border area of Rosh Hanikra, killing a soldier inside. Several hours later, the Israeli military said it shot two Lebanese soldiers after spotting “suspicious movement” in the same area. It was the heaviest fighting between the enemy countries in more than three years and drew condemnations and threats of retaliation from Israel.

Late Monday, the Lebanese army distanced itself from the incident, saying the shooting was the result of an “individual act” by a soldier.

It said a military committee was investigating the incident and was coordinating with the U.N. peacekeeping mission. With the shooter in custody, there was no word on a motive for the attack and no mention of the two soldiers allegedly shot by Israel. The Lebanese army stressed its full commitment to U.N. resolutions, including maintaining the 2006 cease-fire.

The tame language, and near apology for the incident, was rare for the Lebanese military, which is usually quick to point out Israeli border transgressions. It suggested that Lebanon was keen to avoid a conflagration on its border at a time of severe tensions resulting from the civil war in neighboring Syria.

Likewise, Israeli officials tried to lower the tensions. “The idea is to bring the situation back to normal and not aggravate the situation,” said Lt. Col. Peter Lerner, a military spokesman.

The border has remained mostly quiet since the monthlong war in the summer of 2006, though there have been sporadic outbursts of violence. In the most serious incident, Lebanese forces killed a high-ranking Israeli officer in 2010, claiming the Israeli army had crossed the border while uprooting a tree. Israel responded with artillery fire that killed three Lebanese. Given the years of enmity between the two countries, even the smallest incident raises the risk of sparking a wider conflagration.

Late Monday, UNIFIL said it had convened a meeting of senior Israeli and Lebanese officers at the Naqoura border crossing, near the site of the shooting. UNIFIL’s commander, Maj. Gen. Paolo Serra, and the U.N. special coordinator for Lebanon, Derek Plumbly, also attended.

In a statement, Serra said preliminary findings indicated the Lebanese sniper had acted alone, in violation of operational rules and procedures. He said the sides discussed “concrete steps” to strengthen security arrangements, and emphasized their interest in preserving “calm and stability.”

“I was encouraged by the discussion at the tripartite meeting and by the way the parties approached the issues at hand,” Serro said. “They affirmed their full commitment to the cessation of hostilities.”

Lebanon and Israel have been officially at war since Israel’s creation in 1948. Each country bans its citizens from visiting the other, and there are no direct trade ties or diplomatic relations.

Their armies do not communicate directly, but in cases of increased tension exchange messages through the U.N. Face-to-face meetings under U.N. auspices like Monday’s sporadically take place, Israeli officials said.

The 2006 war broke out after Iranian-backed Hezbollah guerrillas crossed into Israel and captured two Israeli soldiers. The ensuing monthlong conflict killed about 1,200 Lebanese and 160 Israelis.

Hezbollah has an arsenal of tens of thousands of missiles and rockets aimed at Israel, and Israeli officials say it is only a matter of time for renewed fighting against the Shiite militia. But officials believe Hezbollah is not interested in fighting at the current time because it is preoccupied with the war in Syria, where it is aiding the forces of President Bashar Assad.

Israel and Lebanon have fought several wars before. In 1982, Israel invaded Lebanon with the stated intention of driving Palestinian guerrillas out of the south. The Israeli military battled halfway through the country into Beirut and occupied south Lebanon until 2000.

The Lebanese are banned from calling or traveling to Israel or having contacts with Israelis. Such an offense is punishable by anything from a few weeks to life in prison with hard labor, depending on the kind and level of contact. All Israeli products are banned in the country, including Israeli films.

Israel restrictions are slightly less stringent, with phone calls to Lebanon and Lebanese film screenings permitted, though it is a punishable offense for an Israeli to visit Lebanon.

The two nation’s carriers do not fly over each other’s airspace. Travelers coming from Israel to Lebanon usually go through Jordan or Egypt. Those with Israeli stamps in their passports are deported, which forces travelers to carry a second passport.

Those who have visited in Lebanon and arrive in Israel are heavily questioned at the border or airport.