US: History will find it strange that Russia backed Assad 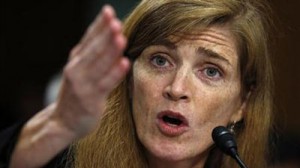 Russia and western nations clashed over who is to blame for chemical weapons attacks in Syria at a UN Security Council meeting Monday.

“Acrimonious” talks were held at the closed meeting on a UN investigation into chemical weapons attacks during the 33-month-old civil war, according to France’s UN ambassador Gerard Araud.

Russia renewed allegations that the Syrian opposition staged attacks near Damascus in August and in other cities. The United States, Britain and France maintain that President Bashar al-Assad’s forces carried out the attacks.

A UN mission led by Swedish expert Ake Sellstrom said in a report released last week that chemical weapons were used, or were almost certainly used, in five attacks in Syria. The team did not have a mandate, however, to say who was responsible.

After the talks, Russia’s UN ambassador Vitaly Churkin accused opposition rebels of staging an attack at Ghouta near Damascus on August 21 in a bid to provoke a US military strike. He also blamed rebels for a chemical strike near Aleppo on March 19 during which Syrian government troops were among the victims.

The United States has blamed government forces for the August sarin gas attack at Ghouta which it says left more than 1,400 dead. 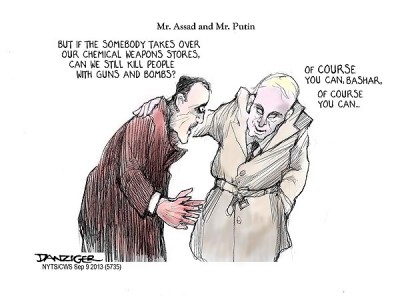 “It is absolutely obvious that on August 21 a widescale provocation was staged” by Syrian rebels “to provoke foreign military intervention,” Churkin told reporters.

He said a government strike on Ghouta would only “invite a missile strike upon itself.”

Churkin said Russian requests for US detail on Syrian government involvement in chemical attacks were “ignored” by Washington.

US ambassador Samantha Power hit back at the Russian accusations during the meeting, diplomats said.

Russia has “a remarkable trust in a government that sends rockets at — and bombs its own population,” Power was quoted as telling Churkin at the meeting.

“History will find it strange” that Russia backed Assad’s government “to such an extent,” the US envoy added.

US officials insist they have no proof that Syrian rebels have or have used chemical weapons. They say the Aleppo strike was probably a badly targeted government attack that killed their own troops by mistake.

“Russia tries to do the ‘giant squid’ technique: put as much ink as possible into the water” to confuse events, Lyall Grant told Churkin, according to envoys in the meeting.

Following the sarin attacks, Russia and the United States drew up a plan to force Syria to hand over and destroy its chemical arms, which are banned under international law.