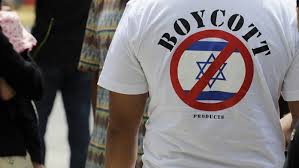 An association of American scholars has voted for an academic boycott of Israeli colleges and universities in protest against Israeli policies towards the Palestinians, the group said on Monday.

Two-thirds of the 1,252 members of the American Studies Association who voted approved a boycott resolution, which stems from a broader campaign to isolate Israel that has made little headway in the United States but has gained some traction in Europe.

The group, which is devoted to the study of American culture and history and has about 5,000 members, put the controversial issue to an online vote that concluded on Sunday.

It became the largest U.S. academic group to back an anti-Israel boycott, a movement that Israel and its supporters say unfairly singles out the Jewish state. The vote, however, is mostly symbolic since the group has no power to compel members or any U.S. institution to abide by it.

“The resolution is in solidarity with scholars and students deprived of their academic freedom and it aspires to enlarge that freedom for all, including Palestinians,” the association said in a statement.

It cited “Israel’s violation of international law and U.N. resolutions; the documented impact of the Israeli occupation on Palestinian scholars and students; (and) the extent to which Israeli institutions of higher education are a party to state policies that violate human rights.”

Ronald Lauder, president of the World Jewish Congress, said, “This vote to boycott Israel, one of the most democratic and academically free nations on the globe, shows the Orwellian anti-Semitism and moral bankruptcy of the American Studies Association.”

“The Middle East is literally filled with dead from governments’ reaction to the convulsions of the ‘Arab Spring,’ but the American Studies Association singles out the Jewish state, the one Middle Eastern country that shares American values, for opprobrium?”

Lauder praised the American Association of University Professors, a much larger academic group, for expressing its opposition to such boycotts.

The American Studies Association’s resolution, which follows a recent unanimous vote by the group’s national council in favor of the measure, urges U.S. schools not to collaborate with Israeli institutions. But it carries broad exemptions for individual Israeli scholars working with American counterparts.

In May, British cosmologist Stephen Hawking withdrew from a prestigious Israeli conference. Cambridge University said he did so as part of a boycott by some British academics in protest against Israel’s occupation of the West Bank, lands the Palestinians want for a future state.