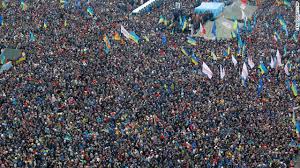 Ukraine’s president could secure loans from Russia on Tuesday when he meets Vladimir Putin at the Kremlin – money that could help fend off economic crisis as anti-government protests continue in Kiev.

Demonstrators demanding that Viktor Yanukovich step down after he spurned a trade and investment deal with the European Union last month plan a new show of force in Ukraine’s capital on Tuesday as the president meets his Russian counterpart.

Caught between Western powers, keen to anchor the nation of 46 million in a friendly embrace on the EU’s borders, and Moscow, which accuses the West of turning its former Soviet territories against it, Ukraine is in the grip of impending financial crisis that could hit fuel supplies this winter.

President Putin, who meets Yanukovich at 3 p.m. (1100 GMT), seems set to agree a loan deal, and possibly offer Ukraine a discount on the Russian natural gas on which its people depend. 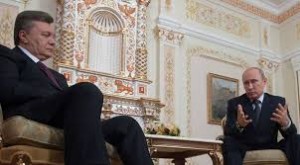 “The situation in Ukraine is now such that without loans, from one side or another, they will simply fail to maintain economic stability,” Andrei Belousov, an economic adviser to Putin, told Interfax news agency. “I do not rule out that, if there is a request, a credit could be provided.”

Russia’s Finance Ministry confirmed talks on a loan were under way. Ukraine’s dollar bond prices rallied and debt insurance costs fell as concerns receded that Kiev would become unable to pay its creditors.

Despite snow and freezing temperatures, Yanukovich’s opponents mustered 200,000 people in Kiev on Sunday to call for his removal and for a free trade pact with the European Union, which Yanukovich rejected last month after threats from Russia to cut off gas supplies and block Ukrainian imports.

They have called for a new demonstration on Tuesday.

Many of those protesting say they fear greater influence from the Kremlin, which exerted oppressive power over Ukrainians during the Soviet period, and see closer ties with the 28-nation EU offering greater freedoms and prosperity.

Many are also complaining about Yanukovich’s record as he prepares to campaign for re-election in just over a year. Opponents, backed by EU leaders, accuse him of manipulating the judicial system to keep opposition leader Yulia Tymoshenko in jail. Ukrainians also begrudge widespread corruption.

Agreement on Tuesday would also be seen in Moscow as a triumph for Putin keeping Ukraine in Russia’s political and economic orbit more than two decades after the Soviet Union collapsed, and preventing a historic westward shift by Kiev.

Ukraine is seeking help to cover an external funding gap of $17 billion next year – almost the level of the central bank’s depleted currency reserves.

Putin aide Belousov did not say how much Russia, whose own economy is stuttering badly, would be ready to offer Ukraine. But sources in Ukraine said the deal could be worth $15 billion, with Russian providing about $3-5 billion up front.

The most Brussels has so far offered Ukraine is 610 million euros ($838 million) but EU officials are in discussion with the International Monetary Fund, the World Bank and other financial institutions on ways to help Ukraine.

Apart from loans, Ukraine is seeking a lower price for Russian gas – now at around $400 per 1,000 cubic meters – to help it cope with its debt burden.

Ukrainian Prime Minister Mykola Azarov says he hopes a deal on cheaper gas prices will soon be concluded. A reduction of at least 10-15 percent is likely, sources in Kiev said.

Tuesday’s talks are intended to conclude a “substantial package” of agreements to chart out a road map to removing trade barriers for Ukraine with Russia, both sides say.

Yanukovich is seeking the best deal possible for Ukraine but playing East against West is a hazardous maneuver running the risk of alienating both parties and there is no certainty Ukraine can avoid default or a currency crisis.

Putin regards Ukraine as vital to creating a political and economic union stretching from the Pacific to the EU’s borders. But Yanukovich is not expected to sign Ukraine up for a Russia-led customs union which Putin sees as the basis for this.

Holding out on membership of the customs union could be Yanukovich’s last bargaining chip as he tries to survive the protests in Kiev and win a presidential election in 2015.