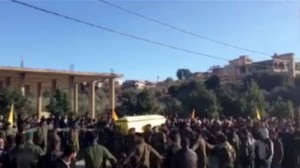 Hezbollah held on Tuesday the funeral of Hussein Abdul Karim Yassin who died fighting alongside the forces loyal to president Bashar al Assad in the Yabrood area of Syria.

Since the spring of 2013 the Iranian-backed Hezbollah Shiite group decided to fight alongside Assad’s soldiers against the mostly Sunni rebels trying to topple him.

In Lebanon, every community lives with the fear of being extinguished, and all feed on this fear according to analysts. By supporting the Syrian regime, Hezbollah believes it is helping its Shiite community but many within the community feel the party is endangering the Shiites. What’s the point in supporting a losing regime?” They say