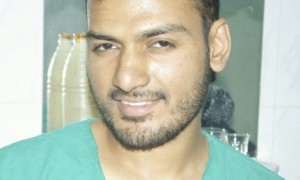 A British surgeon who was arrested last November within 48 hours of arriving in Syria to offer his services as an emergency doctor has died in jail, his family said on Tuesday.

The family of Abbas Khan, 32, an orthopedic surgeon from south London who had planned to volunteer in rebel-held Aleppo, was told he would be released this week, his brother Afroze Khan told the BBC. But when his mother went to visit him in prison in Damascus on Monday she was told he had died, he said.

The BBC reported that a Syrian government official said Khan, a father of two, had committed suicide. But his brother said that was impossible, given that he was preparing to go home with his mother who had spent the past four months in the Syrian capital to be near her son.

“He was happy and looking forward to being released,” Khan said. “We are devastated, distraught and we are angry at the Foreign Office for dragging their feet for 13 months.”

The British foreign office said it was “extremely concerned” by the report, and defended its actions.

“If these tragic reports are true, responsibility for Dr Khan’s death lies with them (the Syrian authorities) and we will be pressing for answers about what happened,” it said in a statement.

The foreign office said officials had frequently sought consular access to Khan as well as information on his detention, both directly and through the Russians, Czechs and others. Britain closed its embassy in Damascus in February 2012.

“These requests have consistently been ignored,” it said.

Khan said when his mother arrived his brother weighed just 32 kg (70 pounds) and was barely able to walk. In letters Abbas Khan wrote to British Foreign Secretary William Hague, he said he had been tortured in detention and kept in isolated, squalid conditions.

Reuters was not able to reach the Khan family for comment.

Kristyan Benedict, Amnesty International’s Syria campaigner in the United Kingdom, said the British government should denounce Khan’s death and ensure that those responsible were brought to justice.

A second Briton, 23-year-old Ifthekar Jaman, was reported to have been killed in Syria at the weekend after joining a rebel extremist group opposed to President Bashar al-Assad.

The foreign office said it was aware of the report and was seeking clarification, but added again that its options for supporting Britons in Syria were “extremely limited”.

“We continue to advise against all travel to Syria,” it said.

A partnership of five universities based at King’s College London reported on Tuesday that between 3,300 and 11,000 fighters from more than 70 nations, including a rising number from Western Europe, have joined the struggle in Syria against President Bashar al-Assad.

After security forces repressed peaceful protests against more than 40 years of Assad family rule in 2011, an armed revolt ensued with an increasingly sectarian element.

Well over 100,000 people have been killed and millions forced from their homes.